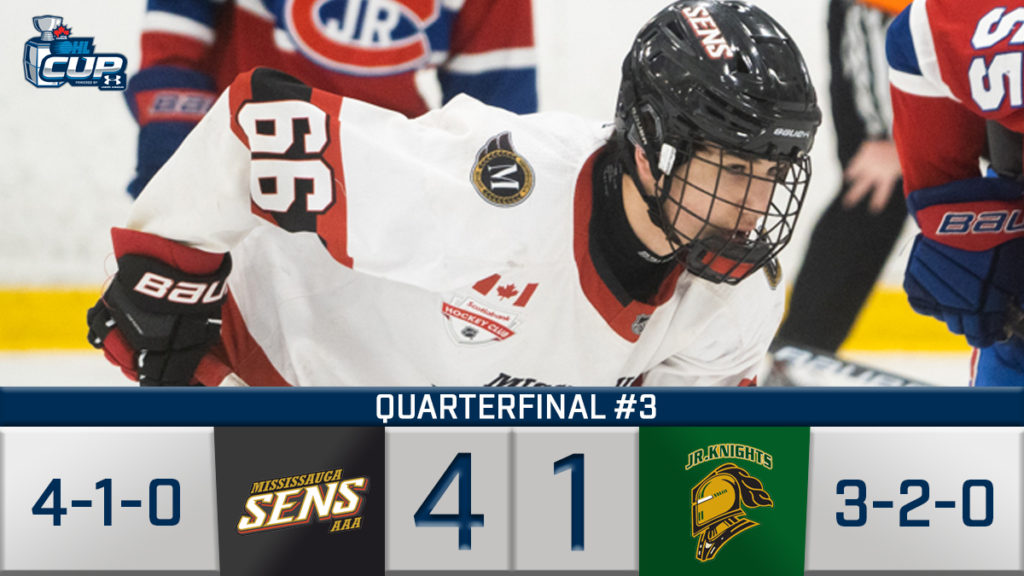 Underage talent Michael Misa (2G, 1A) had three points and the game winning goal as the Mississauga Senators beat the London Jr. Knights 4-1 to advance to the OHL Cup Powered by Under Armour Semi-Finals.

Matthew Souliere (1) pulled the Jr. Knights to within a goal midway through the second period, but the Sens were too much to handle as Riley Patterson (2) reinstated the two-goal cushion early in the third.

Misa (6) hit the empty net with 1:49 remaining to seal the deal and send the Senators to the OHL Cup Semi-Final for the first time since the tournament’s modern format in 2003. Misa sits second in tournament scoring through quarter-final play with 12 points (6-6–12) over five games.

“Throughout the game we just kept playing our game,” said Misa, who earned Player of the Game honours for the Sens. “At the intermission our coaches said to keep playing our game working hard, and we got the job done.”

Looking towards a big game tonight with a spot in the final on the line, Misa and his team are treating it like every game, “We know we just have to prepare right, eat right, work hard and at the end of the day have fun.”

The Sens move on and will face the Markham Majors in Semi-Final action at 6:00 pm.

The Jr. Knights end their tournament with a record of 3-2 as underage talent Ryan Roobroeck led on the scoresheet with seven points (3-4–7) while Jett Luchanko (3-3–6) trailed close behind with six.