Marlies march into Semis with 7-0 win 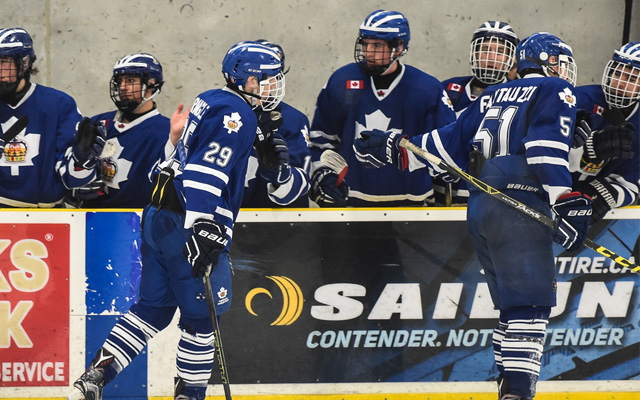 A four-goal first period gave the Toronto Marlboros the start they needed to get past the Hamilton Jr. Bulldogs 7-0 in OHL Cup Quarter-Final action on Saturday.

Danil Antropov scored twice while six others had a goal as the Marlies are headed back to the Semi-Finals in the hunt for their third straight OHL Cup title.

“I think a good first period was really important,” said Marlies captain Allan McShane, who had a goal in the victory. “We should credit our goaltender as well who had to make some big saves even though the game ended 7-0.”

After reaching the OHL Cup Semi-Finals as an underage forward with the Toronto Jr. Canadiens last year, McShane enters tonight’s matchup with some perspective.

“I think the one thing that really sticks with me is seeing how my teammates reacted to the end of their minor hockey careers,” he said. “That’s the reality here. We want to win our last game. A loss and it’s over.”

Thomas Tinmouth, James Buckley, Akil Thomas and Daniel D’Amico all had a goal and an assist for the Marlies while Elliott Tang posted the shutout victory in goal.

The Hamilton Jr. Bulldogs finish their 2016 OHL Cup with a record of 4-1, being led in scoring by Jack Wismer who had eight points (3-5–8) in five games. They reached the OHL Cup Quarter-Finals for the first time in 2016.