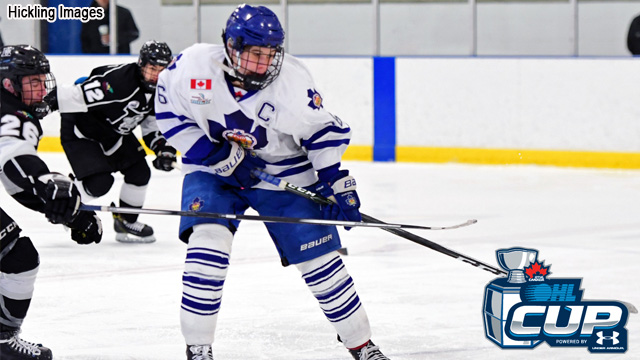 Graeme Clarke scored twice while Jack Hughes registered two assists as the Toronto Marlboros doubled up the Thunder Bay Kings 4-2 to secure a spot in Saturday’s quarterfinal round.

The Marlies outshot the Kings 35-14, with Hughes registering 11 of those shots in a standout performance, earning a positive review from coach Steve Devine.

“Players are the greatest teachers for a coach who wants to learn,” he said. “You get to know your players, what motivates them, how you can challenge them and see how good they can actually be, not to mention that off the ice they’re fantastic kids. To have the opportunity to coach guys like Jack Hughes, Graeme Clarke and all of the kids in this dressing room is a real privilege.”

The Marlies advance to the quarterfinals where they look to push ahead to their 11th straight appearance in the OHL Cup Championship Final.

“For me, this is the third year at the Minor Midget level with the Marlboros and this year moreso than either of the past two you have to show up every night because no two points is ever easy in the GTHL,” Devine added. “I think that’s prepared us for games like the one we will play tomorrow in the quarterfinals. We have to be at our best”

The Marlboros played to a 3-1-0 mark in the Shanahan Division and await the winner of a game between the Mississauga Rebels and Elite Hockey Group to determine who will place first in the Division.

The Thunder Bay Kings fall to 0-3-0 and will face the Ajax-Pickering Raiders on Friday afternoon.