Marlboros back on track with win over Wild 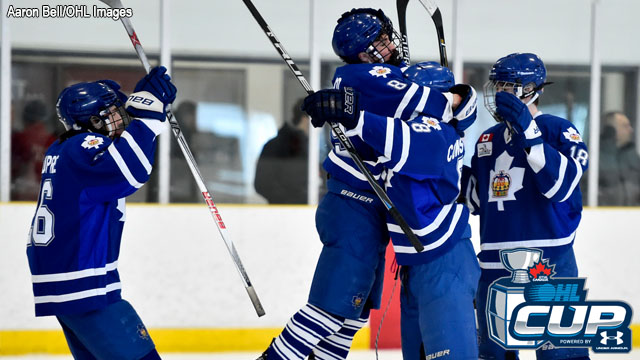 Jack Hughes and Graeme Clarke each scored twice while Daniel D’Amico had a goal and two assists as the Toronto Marlboros doubled up the Eastern Ontario Wild 6-3.

The Marlboros move past a 3-1 loss to the Mississauga Reps on Tuesday, scoring six times on 34 shots as their offensive talent came to the surface on a few very nice goals.

“I think playing in the GTHL all season has prepared us to face a good opponent on any given night, because all of the teams are so competitive there,” said Marlboros captain Jack Hughes. “We were reminded yesterday that we have to bring our best game every night and I think we did a much better job today.”

The Marlboros got into penalty trouble late as Danyk Drouin and Jeremy Quesnel scored power play goals for the Wild to bring them within three. Mathieu Talbot also scored in the loss for Eastern Ontario as their record falls to 1-2-0.

Billy Constantinou also tacked on a goal for the Marlboros in the win while Eric Schneider made 24 saves in goal. The 2-1-0 Marlies will take on the Thunder Bay Kings to round out their preliminary schedule on Friday morning.