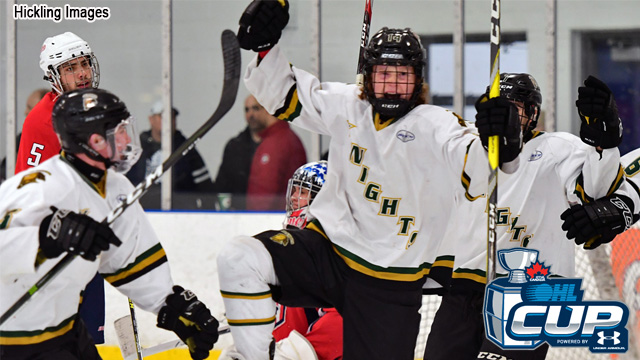 The London Jr. Knights had goals from Will Ryan, Jeff Burridge, Mason Millman and Aidan Preuter, defeating the TPH Thunder 4-1 to stamp a perfect 4-0-0 record on their round-robin performance.

Owen Say made 20 saves in goal and the Jr. Knights went 2-for-5 on the power play, continuing their run of dominance following an ALLIANCE Championship last week.

“We’re definitely happy with our performance, anytime you come to a tournament like this you never know what can happen but we’re pleased with the way our team is playing,” said Jr. Knights head coach Greg Benedetti.

“Guys like Peter Fleming and Luke Drewitt who are important parts of our penalty kill have stepped up big time to help us through some of our recent penalty trouble. We’ll need to play more disciplined hockey on Saturday.”

Brendan Kischnick tallied the lone goal for TPH as the Thunder round out their 2017 OHL Cup Showcase with a 2-2-0 record, failing to unseat the Jr. Knights or Toronto Jr. Canadiens from atop the Subban Division.

The Jr. Knights move on to play in quarterfinal action on Saturday.