London climbs to 3-0 with win over Brampton 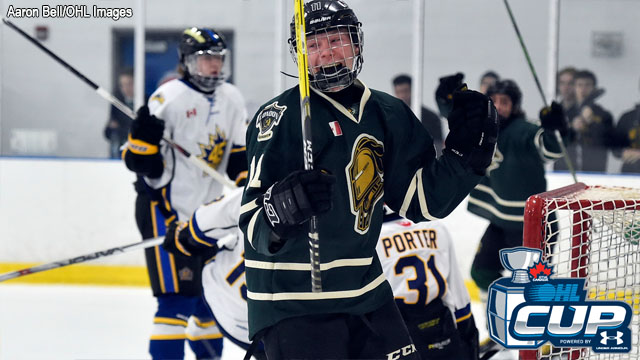 Luke Drewitt scored twice and Liam Van Loon had a goal and two assists as the London Jr. Knights rolled to a 6-2 win over the Brampton 45’s on Thursday afternoon.

The Jr. Knights become the first 3-0 team at the 2017 OHL Cup Powered by Under Armour as they lead the Subban Division with six points.

“We’re playing great and that was another really good game,” said Drewitt post-game. “I scored twice but I have to give credit to my linemates Peter Fleming and Liam Van Loon for helping me get those chances.”

“We’re in control now,” Drewitt added, “but we’re not looking past anyone. We have a big game against TPH tomorrow afternoon that we will be getting prepared for. We just have to take it one game at a time.”

Ryan Suzuki, Jeff Burridge and Mason Howard also scored for the Jr. Knights while Player of the Game Peter Fleming and Ryan Will each had two assists.

Christopher Ishmael provided both Brampton goals in the loss.