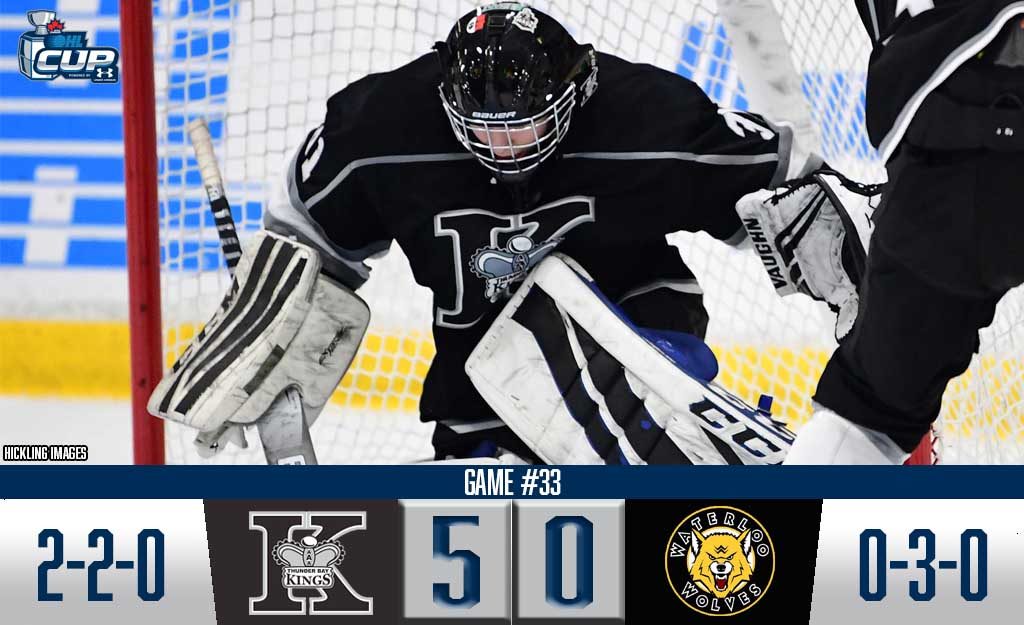 Julien Lefebvre stopped all 35 shots that came his way as the Thunder Bay Kings earned their second win at the OHL Cup Powered by Under Armour for the first time since 2014.

Jeremy Dunmore (2, 3, 4) hit the empty net twice to finish with a hat-trick as the Kings improved to 2-2 in front of Lefebvre’s sterling performance.

“We’ve got a real good age group this year and I’m very happy with the way the guys have played,” said Thunder Bay head coach Bill Nicholl. “It’s a real honour for these kids to come here and represent Thunder Bay. We love the OHL Cup up there and this is the highlight of these guys’ minor hockey careers.”

Dalton Mayes (1) and Johnny McCollum (1) also scored for the Kings as they prevailed despite being outshot 35-22.

Waterloo’s Nathaniel Miloje made 17 saves in the loss as the Wolves fell to 0-3.

With the Toronto Marlboros and Quinte Red Devils locking up the top two spots in the Shanahan Division, the Kings head home with a pair of wings. They were led in scoring by defenceman Alex Pineau (3-1–4) whose memorable overtime winner and natural hat-trick on Thursday has been one of the tournament’s best performances. Alex Atwill (2-2–4) also had four points for Thunder Bay.

Waterloo completes its round robin schedule against the Toronto Marlboros at 5:15pm.