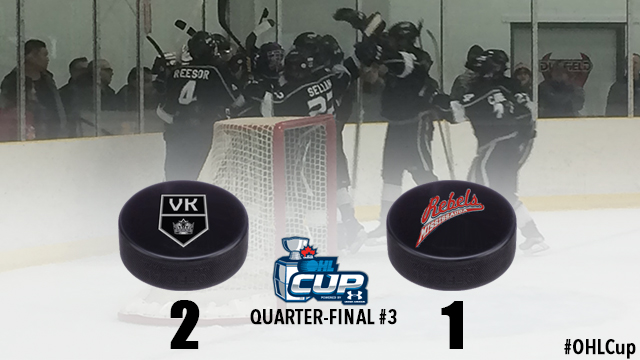 Blueliner Thomas Harley broke a 1-1 tie 43 seconds into the second period as the Kings survived the Rebel onslaught to hang on and advance to the OHL Cup Semis.

“I’m proud of these guys and what they’ve gone through to get here,” said Vaughan head coach Beau Moyer after the win. “The work ethic, the execution, the focus has all been there and our guys have earned this. We’ve had outstanding goaltending the whole way.”

Christian Sbaraglia made 36 saves, including some key ones late in the game while a defence corps led by captain Nathan Staios did laymen’s work in keeping the dangerous Rebel attack to the perimeter.

Drew Ferris also scored in the win for Vaughan while Ty Jackson found the back of the net for Mississauga.

The Kings have reached the OHL Cup Quarter-Final twice in the past six years before failing to advance to the Semis in both 2012 and 2014. They enter unchartered territory tonight when they square off with the Toronto Nationals at 8:00pm.

The Mississauga Rebels suffer their one and only loss of the OHL Cup, ending their run with a record of 4-1-0 as blueliner Anthony Aguanno led the team in scoring with six points (2-4–6). Reid Russett led the Rebels with four goals.

The Rebels were both GTHL Champions and Silver Stick Champions this past season.