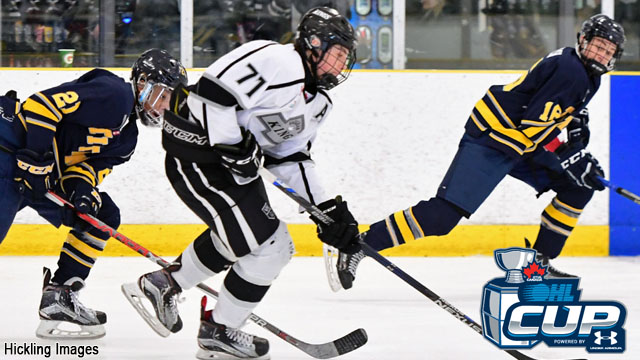 The Vaughan Kings got another solid performance from goaltender Christian Sbaraglia, defeating the Toronto Titans 3-1 on Wednesday afternoon.

Vaughan’s ascent in the Lindros Division standings comes following a valiant comeback to tie the OMHA Champion Whitby Wildcats on Tuesday before Wednesday’s win over the Titans that featured goals from Colin Campbell, Nicholas Porco and Drew Ferris.

The game wasn’t without its physicality as the two GTHL opponents battled through 45 minutes with the Kings coming out on top.

“They want it bad, we want it bad, and that’s what happens,” said Vaughan captain Nathan Staios. “I really like our compete level right now. We’ve got guys making that extra effort to make plays and get to pucks and it’s paying off.”

Sbaraglia had his shutout bid thwarted with just two seconds remaining in regulation, ending a 36-minute run of shutout hockey spanning back to Tuesday’s relief duty against Whitby.

“He’s in the zone right now and we really trust him back there,” Staios said of his netminder. “He communicates really well and plays the puck for us defencemen. He’s been a big part of our success all season.”

Brannon Butler provided the lone goal for the Titans who lose after their lopsided 7-1 Wild Card Play-In win over Kitchener on Tuesday.