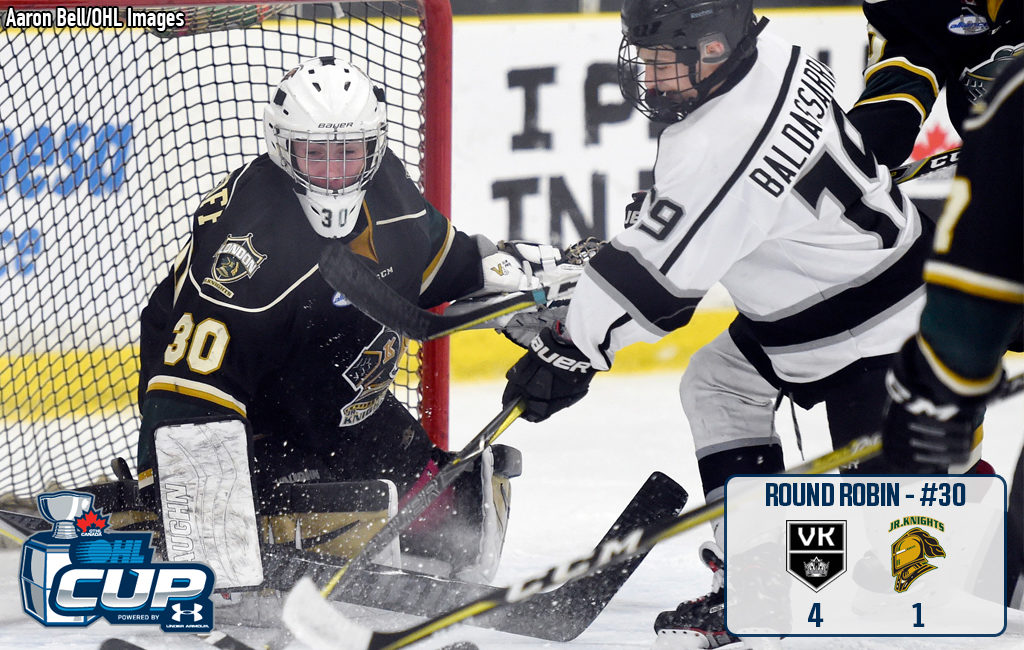 It took them awhile to get going, but once they did the Vaughan Kings netted four third period goals to sprint into the quarter-final with a 4-1 win over the London Jr. Knights.

Ty Tullio (3, 4) led the charge with two goals and a team-leading 12 shots on goal while Toby Rizzo (2) and Daniel Baldassarra (2) also found the back of the net as Vaughan completed the round robin undefeated at 3-0-1.

“We had to get the nerves out,” said Tullio with a laugh. “We weren’t able to score on those early power plays and didn’t really start executing until the third. I still think we played pretty well and we’re going to the quarter-final with some momentum.”

Tullio, who plays alongside Cole Perfetti and Eric Russell, leads the Kings with seven points (4-3–7) in four games.

“We’re a talented group and I think the sky’s the limit for us,” he added. “We’ve beaten some pretty good teams this year so we know we have it in us. The work only gets harder from here though so we’re going to be prepared.”

Marco Constantini turned aside 26 shots for Vaughan and boasts a 1.46 goals-against average and .942 save percentage over four games.

Matson Micallef (1) opened the scoring for London, getting an assist from defenceman Sheldon Serraglio with 36 seconds left in the second period.

London goaltender Tim Kerkhoff made 29 saves as the Jr. Knights were outshot 33-27 and fall to 0-3-0 in the showcase.