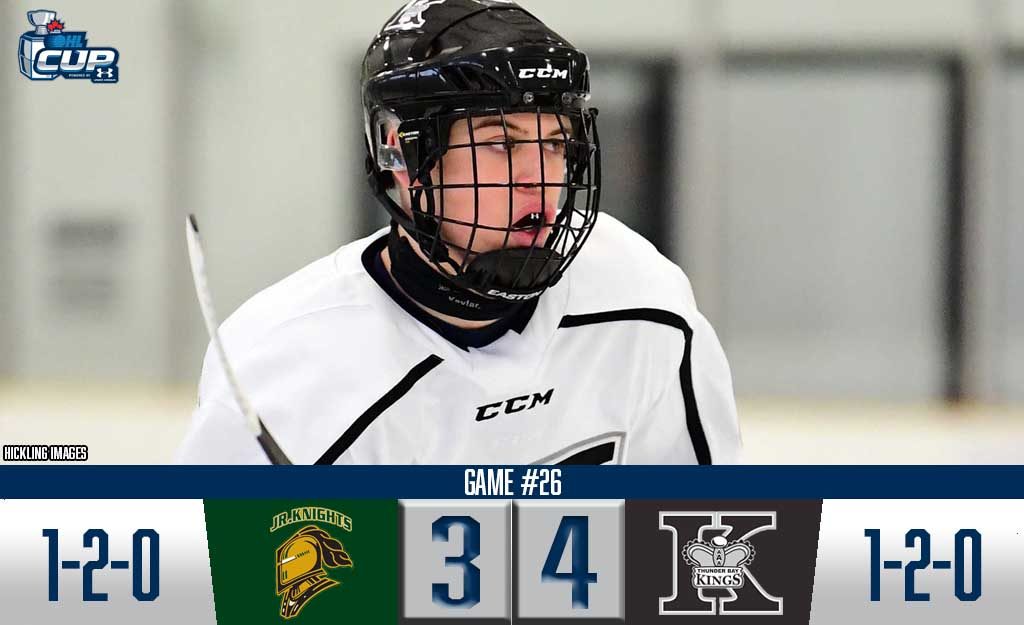 Alex Pineau (1, 2, 3) completed a natural hat-trick on an overtime breakaway to give the Thunder Bay Kings their first OHL Cup win since 2016.

Thunder Bay fell behind the London Jr. Knights 3-0 before Alex Atwill (1) started the come back 1:24 into the second period. Pineau, a defenceman, would score with one minute remaining in the second, 3:52 into the third frame and again 6:50 into overtime to bring the Kings all the way back for a 4-3 victory.

“Pretty indescribable to pull that off,” he said with a smile. “It’s a good feeling to put Thunder Bay back in the win column here. A lot of great players have worn this logo and it’s an honour to do it here at the OHL Cup.”

While Pineau was the hero of the day, Atwill finished with a goal and two assists while Jacob Sargent had a pair of helpers. Gage Stewart made 26 saves in goal for the win.

ALLIANCE scoring leader Brett Harrison (1, 2) scored a pair of goals for London while Cole Watson (2) had a goal and two helpers. The Jr. Knights fall to 1-2 with their round robin finale coming against the 2-1 Quinte Red Devils on Friday at 12:00pm.

Thunder Bay squares off with the Waterloo Wolves on Friday at 11:30am.