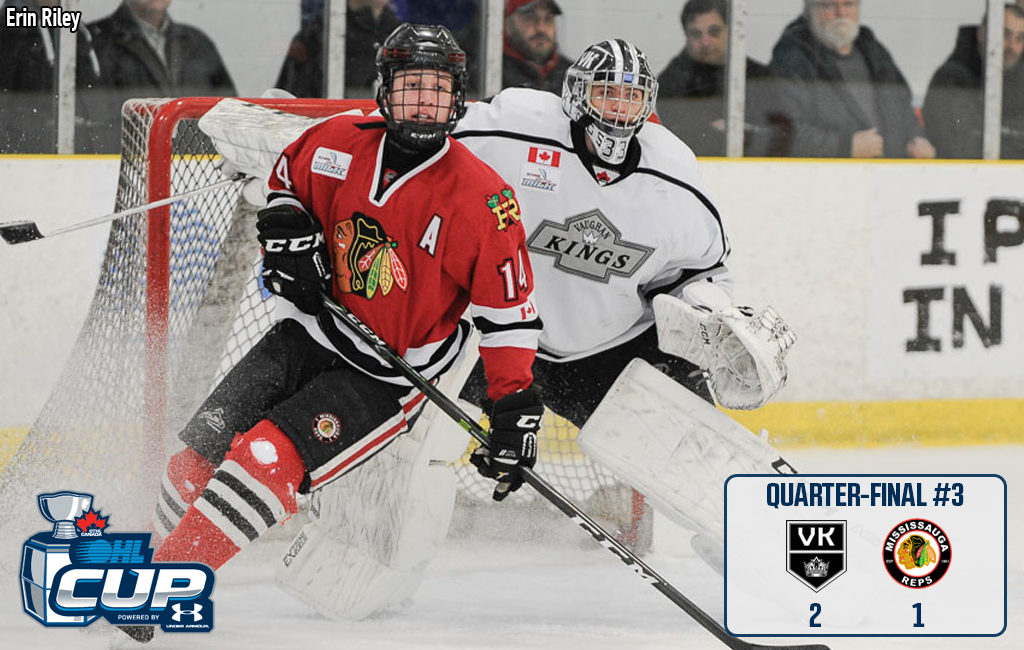 In one of the most closely-matched games of the showcase thus far, the Vaughan Kings and Mississauga Reps went shot-for-shot right down the final buzzer.

Some timely saves from Marco Constantini paired with effective work in the defensive zone from Ryan O’Rourke, Austin D’Orazio and the rest of the Vaughan blue line helped the Kings stave off a Reps comeback bid, advancing to the OHL Cup semi-final with a 2-1 victory.

The two clubs had tied in all three of their GTHL regular season meetings but Vaughan claimed victory in the biggest of them all as Liam Babcock (3) and Cole Perfetti (3) provided the offence.

“It was intense right to the end,” said O’Rourke, who didn’t leave the ice much in the final five minutes of regulation. “Those timeouts came in handy because we were just going one shift at a time. They came at us hard but we pushed back. It’s a great feeling right now.”

O’Rourke and forward Cole Perfetti both reached the OHL Cup Quarter-Final with the Whitby Wildcats last season, coming up short against the Toronto Young Nats.

“Second chances are great,” O’Rourke added. “I know Cole and I know the feeling of losing in this game a year ago and to be on the other side of it is something else.”

Sebastian Tamburro (2) scored 3:41 into the third to bring the Reps to within one, but that’s as close as they’d come as Constantini made 28 saves to secure the win.

Mississauga’s Tristan Lennox was equally impressive with a 28-save showing at his end. The Reps go home with a 3-2-0 record in the showcase as a new OHL Cup champion will be crowned in 2018.

The Reps were led in scoring by defenceman Michael Renwick who leads all tournament blueliners with eight points (1-7–8) in five games. Forwards Aidan Hughes (3-3–6) and Davis Young (2-4–6) trailed with six points each while Lennox played to a 3-2-0 record, posting a 1.91 goals-against average and .915 save percentage with a shutout.

Vaughan advances to face the York-Simcoe Express in semi-final action tonight at 8:00pm.

Liam Babcock intercepts a pass and takes off for Vaughan’s first goal.