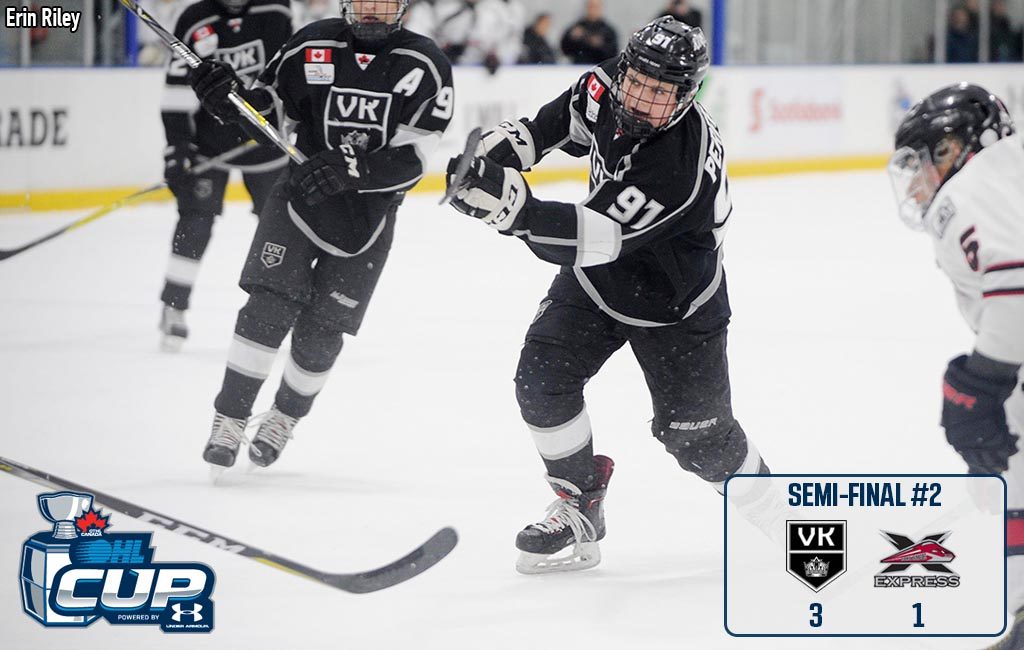 The Vaughan Kings are headed to their first ever OHL Cup Championship Final.

Ty Tullio (5), Cole Perfetti (4) and Daniel Baldassara (3) scored goals in a 3-1 win over the OMHA champion York-Simcoe Express as the Kings have booked a date with the Toronto Jr. Canadiens on Monday night at the Mattamy Athletic Centre in downtown Toronto.

Marco Constantini made 27 saves in goal, backstopping Vaughan to victory.

“We’re on top of the world,” said the netminder after the win. “We didn’t make it out of the GTHL Semi-Finals, but here we are, playing for the OHL Cup.

“We never gave up on our goal and now we’re one win away.”

Cameron Butler (6) provided the lone York-Simcoe goal and Alexander Imperio made 26 saves as the Express go home with a 5-1-0 record.

“These kids have played so much hockey, battling these last six games has been real tough and it’s a tribute to our guys the way they pulled this off,” said Vaughan head coach Dennis Houlahan. “Myself and the rest of the coaching staff are all very proud of them.”

York-Simcoe was led in scoring by Evan Vierling who currently sits tied for second in the showcase with 10 points (5-5–10) over six games. Butler led the team with six goals while star centreman Quinton Byfield wrapped things up with seven points (4-3–7).

The Kings meet the Toronto Jr. Canadiens at 7:07pm on Monday night at the Mattamy Athletic Centre as the two familiar GTHL foes battle for the OHL Cup on Sportsnet Ontario.

Tyler Tullio opens the scoring for Vaughan with a great shot.