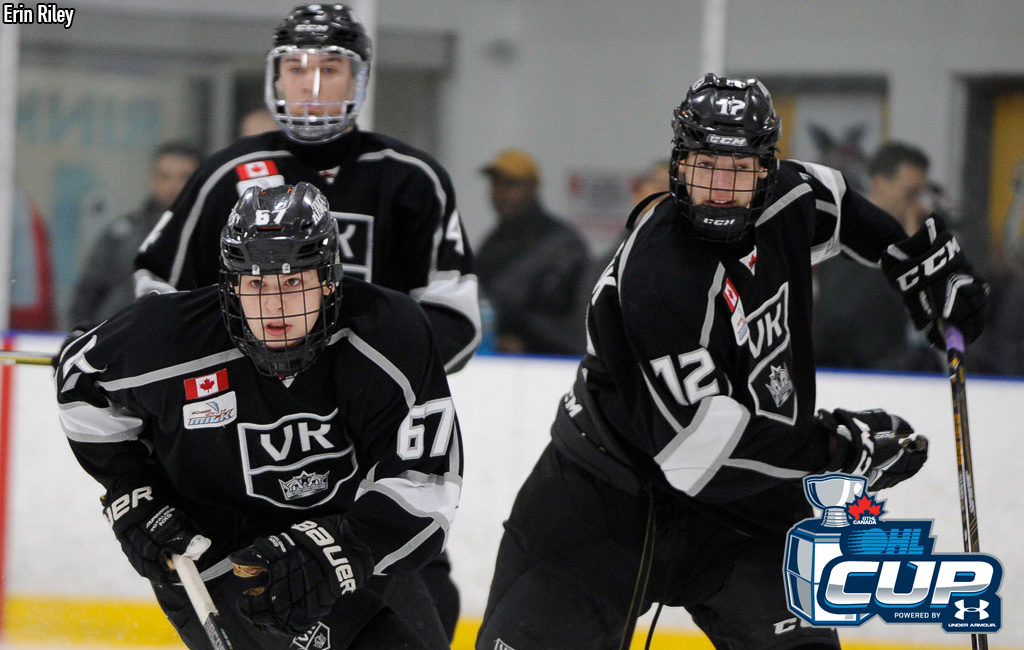 For the Vaughan Kings, it’s a chance to solidify themselves as one of the premier Minor Midget programs in the GTHL.

The talented club plays the game with speed and is just one win away from hoisting the OHL Cup for the first time in the event’s history, scoring a 3-1 win over the OMHA champion York-Simcoe Express to get to tonight’s big dance at the Mattamy Athletic Centre.

After the Mississauga Reps won it all last year, Vaughan looks to become the latest first-time winner at the annual showcase.

“First time ever for this program, and it’s nice to be there, but we’re coming to win,” said Kings head bench boss Denis Houlahan who coaches alongside former OHL 100-point scorer Justin DiBenedetto . “Us and the Jr. Canadiens have been neck-and-neck all season, so this one is going to come down to execution.”

2014 GTHL Player of the Year @amascherin_23 of @vaughankingsAAA is one of over 245 current #OHL players who played in #OHLCup before #OHLDraft.

Vaughan ended the season as the fifth-ranked team in the weekly OHL Cup powered by Under Armour Top 10 Rankings while the Jr. Canadiens embarked on the showcase as the sixth-ranked team.

The closely-matched championship encounter saw both teams win two of the four encounters between them this past season. The province will take in the fifth as tonight’s game will be aired live on Sportsnet Ontario at 7:00pm.

“Being on TV is something new for all of us I think,” said Kings forward Ty Tullio who sits tied for the team scoring lead with nine points (5-4–9). “It’s always been a dream of mine to play on the Monday night. I’ve been watching the OHL Cup since I was a kid.”

The Kings hope to shine in the spotlight at Game #53 of the OHL Cup powered by Under Armour. Vaughan hasn’t reached the championship final of a tournament since the Toronto Titans Tourney back in September saw them fall to the Toronto Marlboros.

“I don’t see myself being too nervous, but I know a lot of guys will be feeling it,” said netminder Marco Costantini who will lineup alongside his twin brother Anthony who patrols the Vaughan blue line. “We got this far for a reason, so we should be confident in our abilities and leave it all out on the ice.”

Costantini has played every minute of the showcase to this point, leading all goaltenders with a 1.31 goals-against average along with a .950 save percentage over six games.

Like the Jr. Canadiens, the Kings didn’t make it out of the GTHL Semi-Finals but have a shot at redemption tonight in what, for many, will be the final game of their minor hockey careers.

“These guys have played so much hockey this year and battling through these last six games has been a grind,” said Houlahan. “I’m proud of these guys and what we’ve accomplished so far, now we just have to finish strong and conquer our ultimate goal.”

RJ Broadhead and Sam Cosentino provide the call on Sportsnet Ontario tonight at 7:00pm. Fans can also attend the game free of charge at the Mattamy Athletic Centre in downtown Toronto.