Kings and Jr. Canadiens gear up for Championship Final 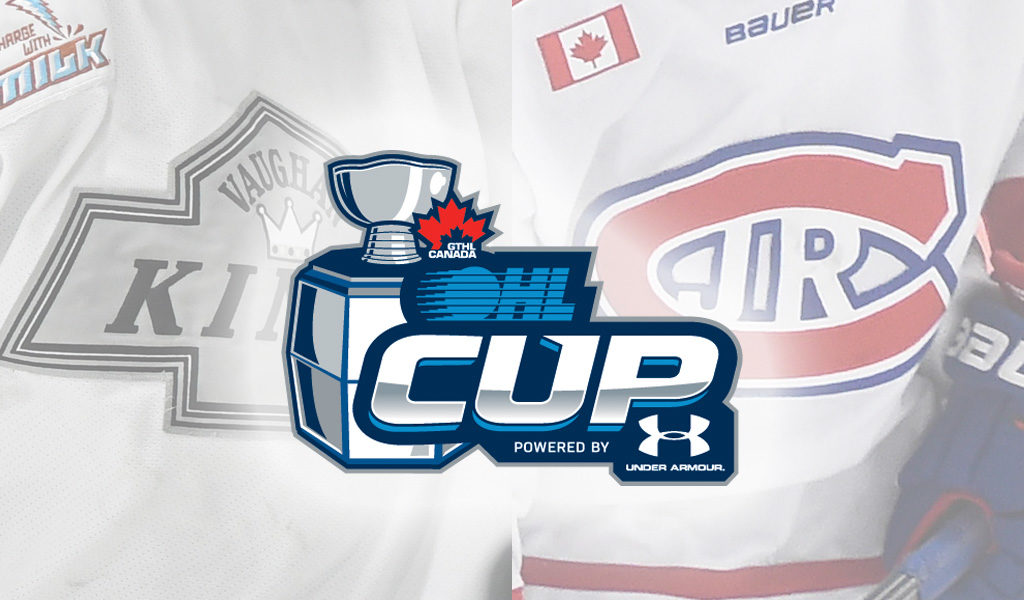 For the fourth time in the last five years the OHL Cup powered by Under Armour Championship Final has come down to two familiar GTHL opponents as a pair of league semi-finalists in the Vaughan Kings and Toronto Jr. Canadiens put it all on the line.

Both undefeated with identical 5-0-1 records in the showcase, the Kings and Jr. Canadiens played a closely-matched season series that saw Vaughan take two of the three encounters while the Marlboros Holiday Tournament champion Jr. Canadiens eliminated the Kings in the semi-final of that showcase.

Regardless of the history, the OHL Cup powered by Under Armour comes down to Game #53 tonight at the Mattamy Athletic Centre in downtown Toronto, a building that has housed some of hockey’s greatest moments in its long tenure as Maple Leaf Gardens dating back to 1931.

Puck drops on the #OHLCup Powered by Under Armour Championship Final tonight at 7pm pic.twitter.com/WzVtBNIRad

“Both of these teams are well-structured, well-disciplined and play a tight style of hockey,” said Director of OHL Central Scouting Darrell Woodley looking ahead to the matchup. “You can expect a fast-paced, high-tempo contest.

“We’ve seen some really competitive championship matchups in the past few years with games going down to the last second or heading into overtime and I expect nothing less tonight.”

The Jr. Canadiens enter action riding high off a 3-2 overtime defeat of the rival Toronto Marlboros on Saturday as defenceman Daniil Chayka scored the game winner.

JRC is in the hunt for its first OHL Cup title since 2008, returning to the big dance for the first time since 2014 when a club including Travis Barron (Ottawa 67’s), Kevin Hancock (Owen Sound Attack) and Drake Rymsha (Sarnia Sting) came up short against the Toronto Marlboros.

“This is a big game and they’ve earned it,” said Jr. Canadiens head coach Dan Sisca, a former 100-point scorer with the Sarnia Sting in 2004. “We were out of the playoffs a little early and our guys worked hard for two-and-a-half weeks while we waited.

“Some of that might have been a little boring and tough to get through, but they’re being rewarded for it.”

Across the ice, the Vaughan Kings punched their ticket to their first ever OHL Cup Championship Final appearance with a 3-1 victory over the OMHA champion York-Simcoe Express on Friday.

An organization that has pumped out prominent OHL talent in Adam Mascherin, Kitchener Rangers teammate Giovanni Vallati and Cole Candella (Sudbury Wolves) sends a highly skilled and motivated group to the ice tonight.

“All three of our lines have gotten hot just at the right time,” said Kings head coach Denis Houlahan. “We’ve been looking for that secondary scoring all year and we finally got it this week. It’s been a treat to see guys step up.”

Secondary scoring has been valuable, but the big names have produced for Vaughan as the dynamic duo of Ty Tullio (5-4–9) and Cole Perfetti (4-5–9) leads the team with nine points each.

Tonight’s game will be broadcast live across the province on Sportsnet Ontario. Fans can also attend the game as admission is free at the Mattamy Athletic Centre. Game time is 7:00pm.