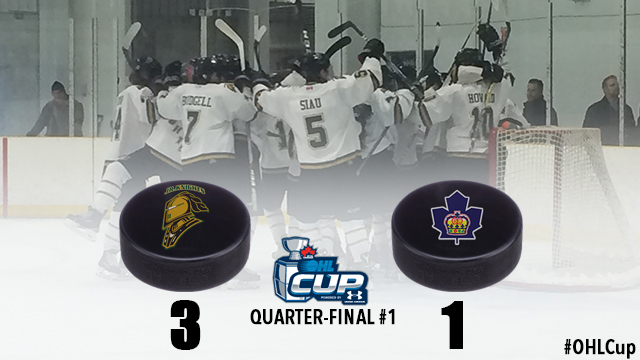 The London Jr. Knights are headed back to the OHL Cup Semi-Final two years after reaching the final four with a team that included current OHL stars in Nick Suzuki (Owen Sound Attack) and Isaac Ratcliffe (Guelph Storm).

Jeff Burridge opened the scoring before London defenceman Mason Howard scored the eventual game winner 2:37 into the third period to give the Jr. Knights a 2-0 lead. Howard added an assist in the win and says his club is locked in right now.

“It was a wild game and we had everyone buy in,” he said. “We play for the guy sitting next to us and we’re one step closer to the goal we set at the beginning of the season. We need to be ready to go tonight.”

Jr. Knights goaltender Owen Say earned Player of the Game honours with a 30-save performance, making numerous timely stops for his club.

“He’s been great all season,” said Howard of Say. “He bounced back from that goal really well and that’s what makes a good goaltender. Being able to forget and make the next save.”

The Marlboros pulled to within one with 7:02 left in the third as Daniel D’Amico snapped a wrister in from down the right wing.

The Knights would survive under siege in the minutes to follow before Liam Van Loon hit the empty net to secure the 3-1 win.

The loss marks the first time the Toronto Marlboros won’t reach the Semi-Final at the OHL Cup since 2006. Their run of consecutive championship appearances comes to an end at 10.

The Marlboros end their 2017 OHL Cup Powered by Under Armour with a 3-2-0 record. They were led in scoring by standouts Graeme Clarke (6-1–7) and Jack Hughes (3-4–7) who each had seven points in five contests.