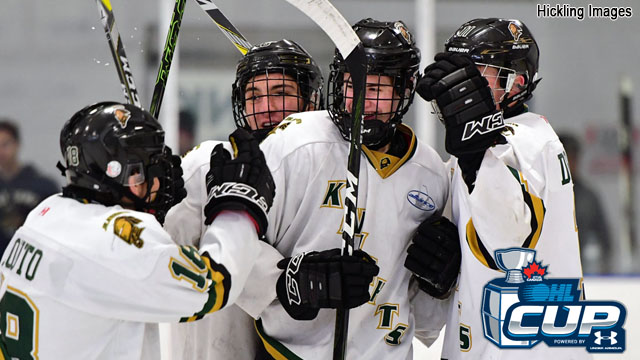 The ALLIANCE Champion London Jr. Knights improved to 2-0 at the 2017 OHL Cup Powered by Under Armour, getting goals from four different scorers in a 4-2 triumph over the Mississauga Senators.

Claiming their second GTHL casualty in as many days following Tuesday’s 3-0 blanking of the Toronto Jr. Canadiens, the Jr. Knights had goals from Peter Fleming, Sam Willits, Aidan Preuter and Bryce Lewis while Levi Siau picked up two assists.

“We’ve got all lines contributing right now, it’s not just the top line guys getting things done,” said Preuter, who was London’s Player of the Game in the win. “Guys like Peter Fleming, who scored for the second straight game, have been real big pieces of our success and we need everyone in our lineup if we want to win the OHL Cup.”

Jordan Frasca and Russell Cocca responded with goals for the Senators, who couldn’t build off a thrilling double-overtime Wild Card Play-In win over the York-Simcoe Express on Tuesday.

“There’s a lot of eyeballs up there watching,” Preuter added,” but we’re doing this for the logo on the chest and we’re proud to be representing the ALLIANCE well here at the OHL Cup.”

The Jr. Knights will look to keep their run of perfection going on Thursday when they square off with the Brampton 45’s while the Sens try and rebound against the Toronto Jr. Canadiens.