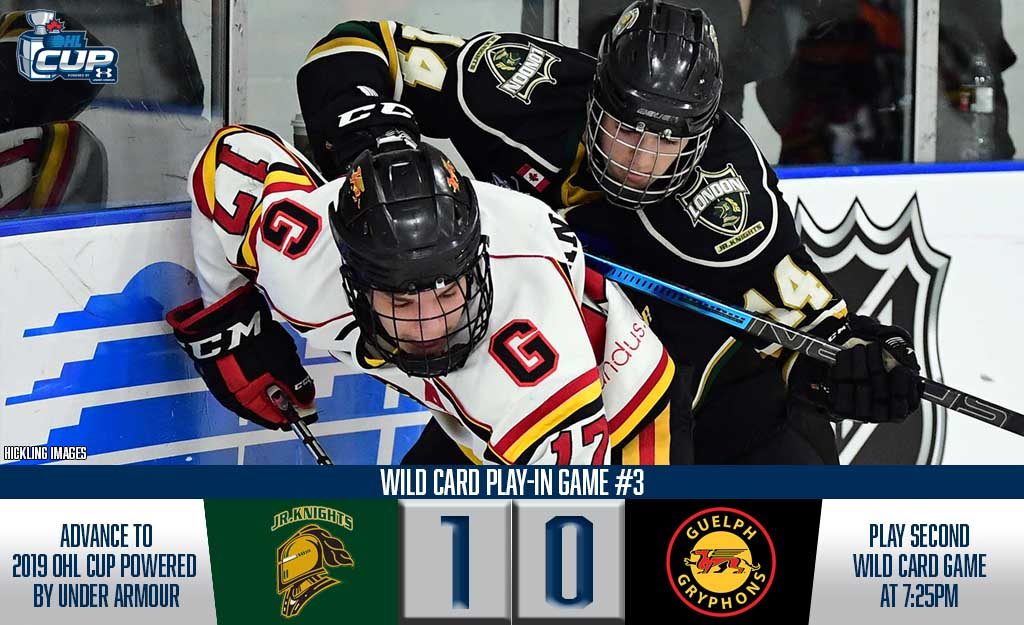 A tight-checking, back-and-forth contest went the way of the London Jr. Knights, who defeated the Guelph Storm 1-0 to return to the OHL Cup Powered by Under Armour for a fifth straight year.

Brett Harrison went upstairs over the shoulder of Guelph’s Alex Nap with 3:49 left in the second period, giving the Jr. Knights all they’d need to secure a berth in the annual showcase.

“It was what you’d expect in a game like this,” said Harrison, who led the ALLIANCE with 63 points (42-21–63) this season. “Our goaltender was great and I thought our guys did a lot of good things out there.

“We’ve bounced back from a first round playoff exit and it feels great to have another chance at things.”

The Jr. Knights lost to the Windsor Jr. Spitfires in first round playoff action before battling their way to an ALLIANCE Wild Card Series with Waterloo that they lost 4-0 in points. Chosen by the OHL Cup Selection Committee, the Jr. Knights have made good on another opportunity to extend their season.

Michael Simpson earned Player of the Game honours for London, stopping everything that came his way to post the third straight shutout of the day. Guelph’s Nap was equally impressive, earning Player of the Game recognition for his team.

The Gryphons have to take the long way into the tournament, awaiting the loser of a matchup between the Waterloo Wolves and Mississauga Rebels tonight at 7:25pm.