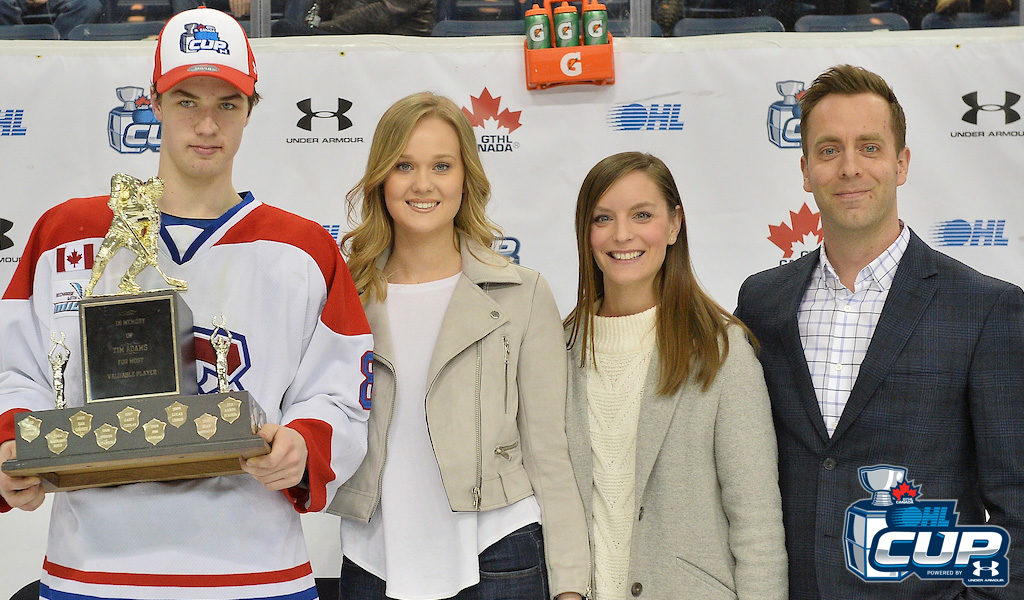 Toronto Jr. Canadiens forward Dylan Robinson is the 2018 OHL Cup Powered by Under Armour MVP, leading the Jr. Canadiens to their second OHL Cup title and first since 2008 with 11 points over seven contests.

Robinson has been awarded the Tim Adams Memorial Trophy, given annually to the Most Valuable Player of the Minor Midget showcase.

The Pickering, Ont. native had a goal in the Jr. Canadiens’ 5-1 Championship Final victory over the Vaughan Kings, bringing his overall total to six goals and five assists.

Robinson’s contributions continued into the playoff rounds as he registered a goal and an assist in a 6-1 quarter-final win over the Sun County Panthers before lighting the lamp again in a thrilling 3-2 overtime win over the Toronto Marlboros in the semi-finals.

Additionally, Robinson led the Jr. Canadiens in shots on goal, finishing sixth in the tournament with 28 to his credit. He was also among the showcase’s top faceoff men, going 49-of-86 at the dot for a 57 percent success rate.

Tim Adams was a graduate of the Greater Toronto Hockey League and a long time coach of both the Toronto Marlboros and Toronto Young Nationals. His life-long commitment to minor hockey truly demonstrated his passion for the game. Tim was unfortunately taken from us at an early age after a courageous battle with cancer. Presenters of the award in 2016 were his three children Sarah Adams, Bryan Adams, and Alanna Keene.