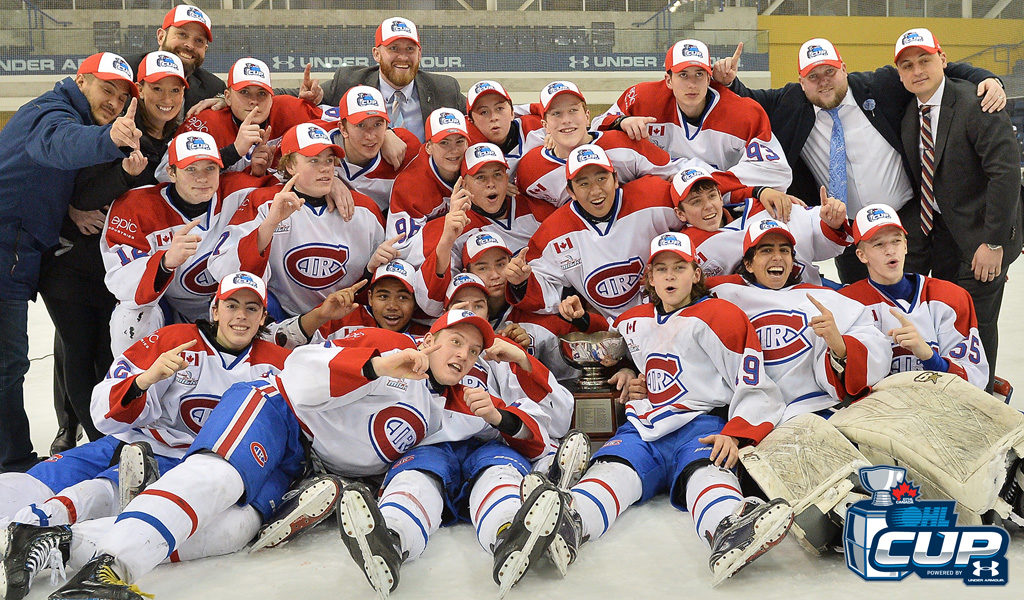 The Toronto Jr. Canadiens are 2018 OHL Cup powered by Under Armour Champions following a 5-1 win over the Vaughan Kings at the Mattamy Athletic Centre in Toronto.

Player of the Game Isaac MacLeod led the way with a goal and three assists as the Jr. Canadiens took an early lead and didn’t look back, hoisting the OHL Cup for the second time, last doing so in 2008.

“It’s surreal right now, really hard to believe,” said MacLeod post-game. “We got that early lead and that’s so important in a game like this, especially with the nerves we had off the start.

“We got that first one, took advantage and got the ball rolling.”

The Jr. Canadiens wasted little time taking the lead as MacLeod scored on a rush down the right wing 2:18 into action. Daniil Chayka drew the lone assist as MacLeod stuffed a low shot through the legs of Vaughan’s Marco Costantini.

After Jr. Canadiens netminder Sami Molu foiled a Kings scoring chance at one end, Toronto came down moments later and added to the lead as MacLeod took advantage of a turnover at the offensive blue line, inspiring a rebound for Ryan Tverberg who made it 2-0 at 9:23.

Liam Kennedy put JRC up 3-0 with 4:24 left on the clock, snapping a wrister past a partially screened Costantini from the top of the circle.

A second period 5-on-3 power play was what the Kings needed to get on the board and pull within two as Ty Tullio sent a cross-crease feed to Cole Perfetti, setting him up for a shot that dribbled across the goal line with 5:23 remaining. Molu came up big a shift later to keep the Jr. Canadiens up 3-1, denying Owen Perala with the glove to halt the Vaughan momentum.

JRC carried a 3-1 lead into the third period though Vaughan controlled the shot clock 26-17.

After Vaughan applied some pressure early in the third, the Jr. Canadiens reinstated the three-goal advantage as Zayde Wisdom pulled a puck out of the corner and centred for a waiting Dylan Robinson who made good on a hard release from the high slot at 3:54.

Jr. Canadiens captain Shawn Spearing tacked on a power play goal less than two minutes later at 5:11 as Cole O’Hara circled around the net and found the defenceman pinching in to shoot a high wrister over the shoulder of Costantini.

Down four, the Kings weren’t able to muster much in the way of opportunities as the Jr. Canadiens locked down the middle, holding Vaughan off until the final buzzer for a 5-1 victory as players streamed onto the ice in celebration.

“For all the hard work these boys have put in, to see them raise the trophy is very rewarding,” said Jr. Canadiens head coach Daniel Sisca. “Myself and the rest of the coaching staff couldn’t be prouder.”

Vaughan outshot Toronto 32-24 as Molu made 31 saves to earn the win.

“Winning this tournament has been a dream for awhile,” said Robinson. “We kept things simple, went over video and were prepared for what they were going to throw at us.

“This is a great honour both for me and for our team.”

The Vaughan Kings end their OHL Cup schedule with a 5-1-1 record, being led in scoring by Cole Perfetti and Ty Tullio who each had five goals, five assists and 10 points in seven games.

The Jr. Canadiens become the fourth GTHL club to win the OHL Cup Championship in the past five years, doing so with a 6-0-1 record while outscoring opponents 33-8.