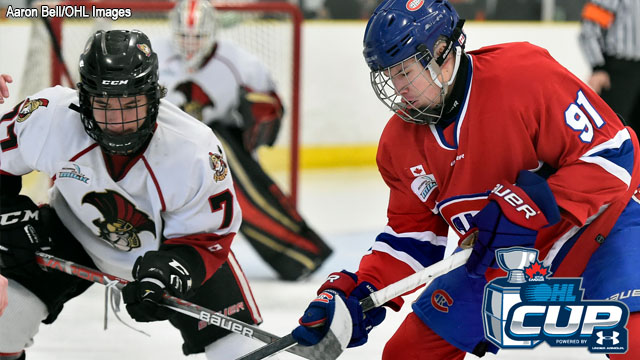 The Toronto Jr. Canadiens closed out Thursday’s OHL Cup action with a 3-0 blanking of the Mississauga Senators to improve to 2-1.

Joe Howe turned in a 26-save shutout while Brendan Hoffman had a goal and an assist as the Jr. Canadiens executed their game plan to collect two valuable points in the Subban Division standings.

“We played responsible hockey today, got pucks in deep and cleared them well,” said Howe who came up with some timely saves to keep the Senators off the board. “My job is easier when our guys play the way they did today.”

Ryan Howe and Justin Law Cobb also had Jr. Canadiens goals as they won despite being outshot 26-21.

With the London Jr. Knights holding a 3-0 record atop the Subban Division, the battle for the second playoff spot will come down to the Jr. Canadiens and the TPH Thunder, who have two games remaining on Friday.

The Senators fall to 0-2-1 with the loss and won’t be able to qualify for Saturday’s quarter-final round.

The Jr. Canadiens close out their preliminary schedule against the Brampton 45’s on Friday.