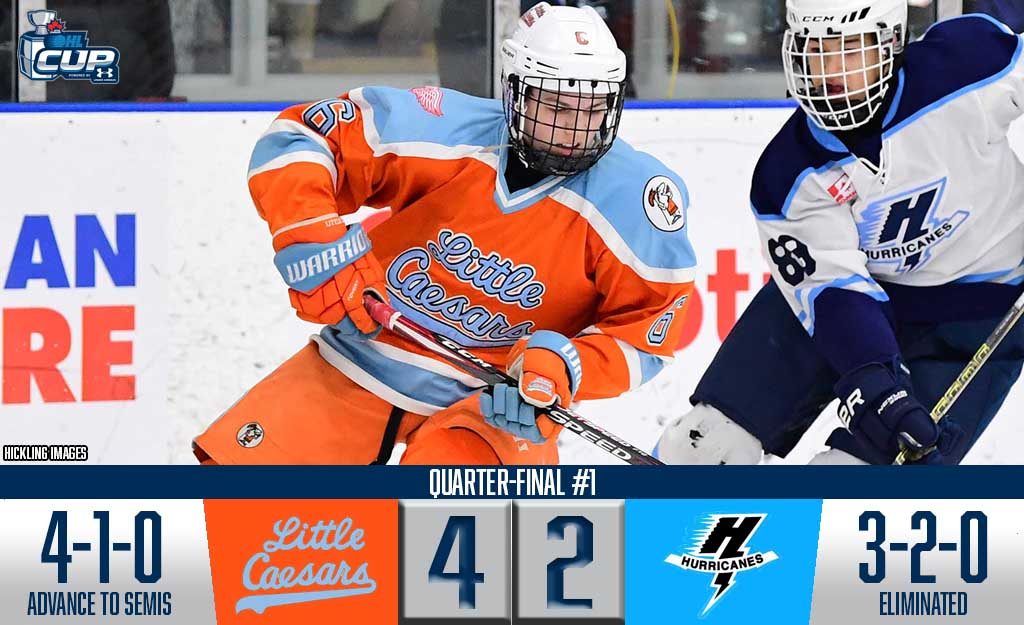 The Detroit Little Caesars poured on the pressure and finally broke through as defenceman Luke Hughes (3) jumped in off the point to shovel home a rebound with less than a minute remaining, breaking a 2-2 tie as Detroit went on to defeat the Halton Hurricanes 4-2.

The Little Caesars become the first American team to advance to the semi-finals since 2013 as they dictated the play, outshooting Halton 38-20.

“They gave us a good game, the competition here has been really good,” said Detroit blueliner Sam Volturo. “Getting to the semis hasn’t been easy but I think everybody has bought in and we’re ready for the next challenge.”

The Little Caesars, who were recently crowned Michigan state U15 champions, had other goals from Jack O’Brien (2), Billy Renfrew (1) and Griffin Jurecki (4) while Zak Brice turned aside 18 shots for his fourth win of the showcase.

Halton’s strong showing comes to an end as they fall to 3-2, getting goals from Ethan Burroughs (3) and Leighton Cooke (2). The Hurricanes managed to take Detroit right down to the wire, finishing their best-ever showcase having defeated the province’s third-ranked Toronto Nationals as well as fellow quarter-finalist TPH Hockey along the way.

Lawson Sherk (4-4–8) led the OMHA Finalist Hurricanes in tournament scoring while Jordan Adams (2-4–6), Ethan Burroughs (3-2–5) and Joseph Meleca (2-3–5) were also big contributors. Goaltenders Braedyn McIntosh, who made 34 saves on Saturday, and Matteo Drobac both posted goals-against averages below 1.70 and save percentages above .940.

The Little Caesars prepare for the semi-final matchup against the undefeated Don Mills Flyers at 6:00pm.