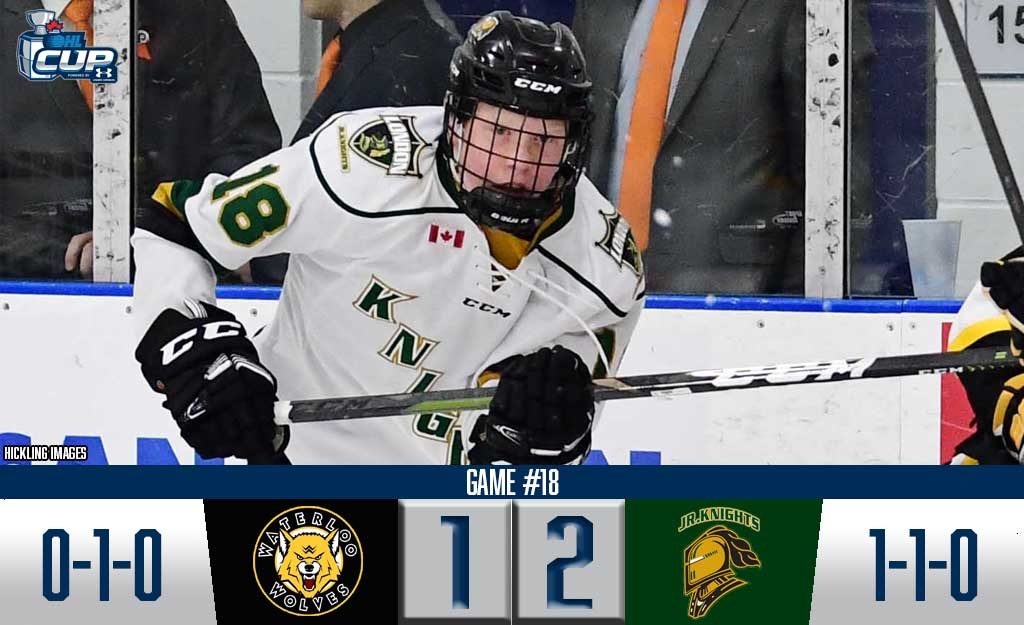 The Waterloo Wolves recently defeated the London Jr. Knights in a two-game ALLIANCE Wild Card qualifying series but it was the Jr. Knights who reigned supreme at the OHL Cup Powered by Under Armour on Wednesday.

Brett Harrison kept a play alive in the offensive zone, finding Riley Wood who in-turn inspired a rebound for Tyler Hotson (1) who scored the game winner with 38 seconds left in regulation as London edged Waterloo 2-1.

Cole Watson (1) also scored for the Jr. Knights as they defeated fellow wild card entry Waterloo behind a strong goaltending performance from Player of the Game Michael Simpson.

“Hotson, Wood, Harrison, those guys have been producing our offence all season and they did it again here,” Simpson said of the players in front of him. “That’s a huge goal for us and it feels good to beat a team from your own league on a stage like this.”

“It’s big for us to bounce back the way we did,” Simpson added of his team’s response to a 6-1 loss to the Toronto Marlboros earlier in the day. “We’re back at 1-1 now and in good shape for tomorrow.”

Cooper Way (1) scored Waterloo’s lone goal as the Wolves played their fourth game in a span of two days after requiring three wild card games to qualify for the showcase.

The Jr. Knights went 2-for-6 on the power play. They’ll return to the ice on Thursday against the winless Thunder Bay Kings at 12:30pm. Waterloo looks to get into the win column against the Quinte Red Devils at 12:00pm.