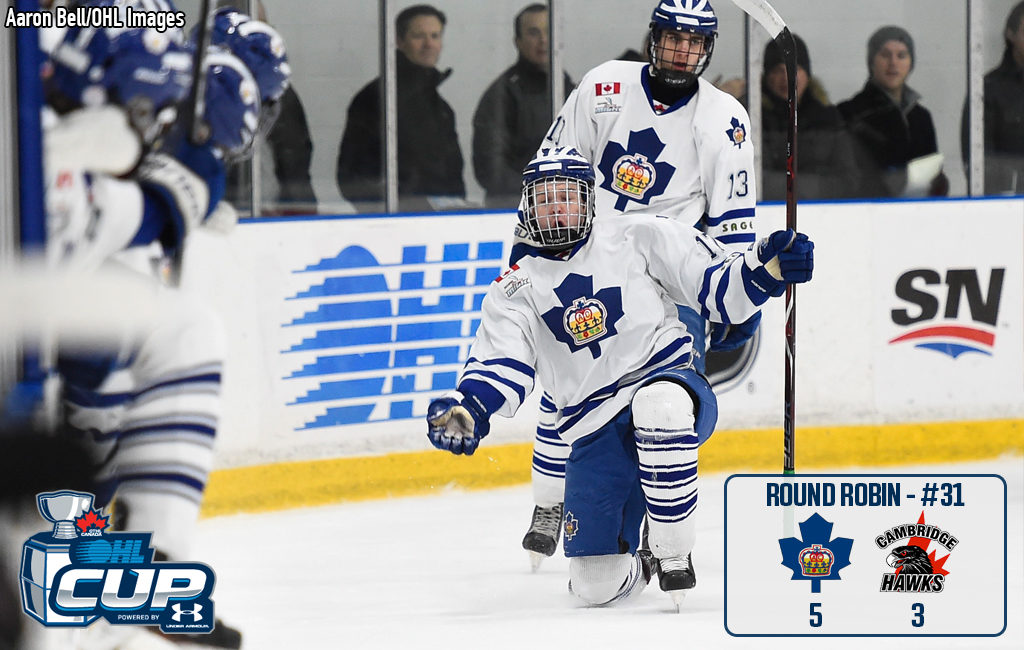 Stephen Halliday (3, 4) scored a pair of early third period goals just 22 seconds apart to put the Toronto Marlboros into the lead for good as they defeated the Cambridge Hawks 5-3 to improve to 3-0-0.

With the Marlies down 2-1, Halliday tipped in a Lleyton Moore point shot 2:13 into the third before taking a pass from Cam Peters to put Toronto in the lead 3-2 at 2:35.

“Our coaches switched up the lines a bit during the second period to try and get us going, but we went back to me, (Cam) Peters and (Riley) Piercey for the third and we connected right away,” said Halliday.

“I wouldn’t say we were worried being behind, we know we have the ability to get back into a game and we did that.”

Will Cuylle (3) added insurance before Ryan Alexander (1) struck late to seal the deal for the Marlboros.

Kallaway Mercer (1) also scored for the Marlboros while Alexander finished the game with a goal and two assists.

Keegan McMullen (1), Joseph Serpa (1) and Peyton Adams-Matthews (1) scored for the Hawks as they finish the round robin with a 2-2-0 record. They now await results from the Guelph Gryphons and Sun County Panthers to determine whether or not they’ll qualify for Saturday’s quarter-finals.

The Marlboros outshot Cambridge 39-20 as Connor MacKenzie earned his third win with a 17-save effort. Cambridge’s Nick Clay was tested regularly at the other end, making 34 stops in defeat.

Toronto is back in action at 4:45pm against the Sun County Panthers.

Will Cuylle scores the game-winning goal for the Marlboros.