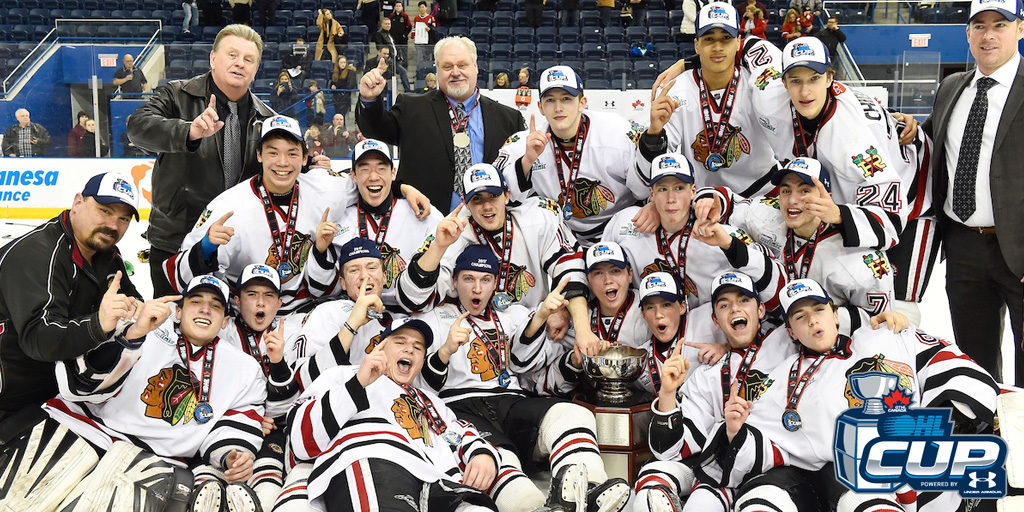 Dennis Golovatchev scored with nine seconds remaining in the third period to give the Mississauga Reps their first ever OHL Cup Powered by Under Armour Championship with a 3-2 win over the Toronto Nationals at the Mattamy Athletic Centre.

“We’ve worked on that faceoff play all season,” said Golovatchev following his late-game heroics. “We pulled it off perfectly. Rowe won it back to me and I just shot the puck.”

The winner came two minutes after the Nationals fought back to tie the score at two on a goal by Brandon Coe.

“We didn’t want to go into overtime because we knew it was going to be nerve-wracking,” said Golovatchev of the feeling on the Reps’ bench. “When coach put me on, we said ‘number two’ – that’s our faceoff play, and it worked.”

Mississauga carried the play for much of the game, outshooting the Nats 41-26 as Toronto goaltender Zach Roy turned in a solid performance to keep his team in the game to the bitter end.

OHL Cup scoring leader Mike Petizian earned Reps Player of the Game honours with a goal and an assist before being named the MVP of the 2017 OHL Cup Powered by Under Armour, recording five goals, eight assists and 13 points over seven contests.

“It’s been a tough go,” said Petizian,” but the guys never quit. I love how we battled back.”

“This team has never let me down,” he said. “They’ve got no quit in them. Our goal all along was to get to this point. We took some lumps along the way but we got here.

“We had a long, hard road, but the kids stuck together. I give them credit. They really took it upon themselves to put in the work and we got the job done.”

The Reps started from behind as the  Nationals got on the board first, capitalizing 9:27 into the opening frame as Rory Graham got his stick on a Carter Schott point shot, tipping the puck past an outstretched Ryan Dugas in the Mississauga goal.

The game opened up in the second as both teams got creative.

Mississauga carried the play early on, forcing Roy into some difficult saves before finally getting on the board with 3:11 left on the clock.

Petizian set up linemate Aaron Jamieson in the slot, dishing a behind-the-back feed through the middle as Jamieson didn’t hesitate, beating Roy with a quick release to make it a 1-1 game.

The Reps outshot the Nationals 19-8 in the second, ending the frame on a two-man advantage that featured numerous big saves from Roy to keep the score knotted at one.

Mississauga’s five-on-three advantage carried over into the third and the Reps capitalized on a fresh sheet of ice as Petizian continued his torrid scoring pace.

Taking a feed through the middle from Lucas Rowe, Petizian stepped into a one-timer that beat Roy over the glove just 48 seconds in to give the Reps a 2-1 lead.

The Reps would hold that lead until the twelfth minute of the third period as Nationals leading scorer Ethan Keppen won a board battle off the forecheck before finding an oncoming Brandon Coe all alone in the slot to tie the score at two with 2:12 remaining.

Just when it looked as though the OHL Cup Final would require overtime for a third straight year, Golovatchev stepped up off the faceoff to rip a wrister into the back of the net.

The Toronto Nationals end their 2017 OHL Cup Showcase with an overall record of 5-2-0. They were led in scoring by Ethan Keppen who recorded a goal and seven assists for eight points in seven games.

Nationals goaltender Zach Roy earned Player of the Game honours for his team and was named to the Gatorade OHL Cup All-Star Team sporting a 1.43 goals-against average, .959 save percentage and two shutouts while leading all goaltenders with 315 minutes played.

The OHL Cup Champion Mississauga Reps wrap up their unforgettable showcase with a record of 6-0-1, outscoring opponents 24-12. They were led in scoring by Petizian while Jamieson Rees also recorded over a point-per-game with five goals, four assists and nine points in seven games.

Six players from the 2017 OHL Cup were also named to the Gatorade All-Star Team, a selection of the annual showcase’s top performers as chosen by OHL Central Scouting.

Three players from the Championship Final including Mississauga forwards Jamieson Rees and Mike Petizian joined Ethan Keppen, Robert Calisti and Zach Roy of the Nationals in the list of standouts. Mississauga Rebels blueliner Anthony Aguanno rounded out the selections.

The 2017 OHL Cup Championship Final was played before an enthusiastic crowd at the Mattamy Athletic Centre in downtown Toronto and was broadcast to a national audience on Sportsnet Ontario.