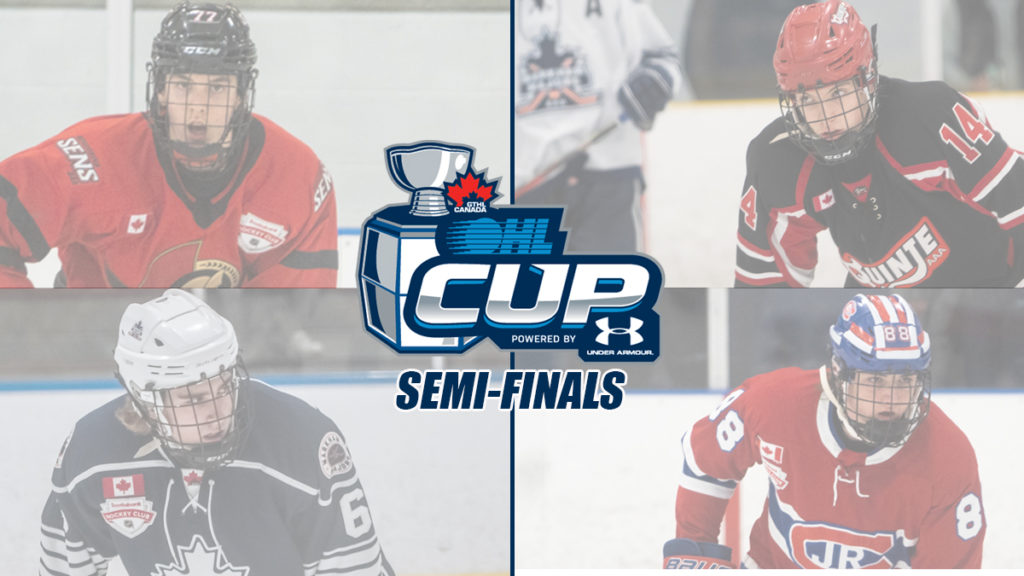 From 20 teams down to four, the OHL Cup powered by Under Armour Semi-Finals feature a pair of great matchups. The Toronto Jr. Canadiens, Markham Majors, Quinte Red Devils and Mississauga Senators remain in the hunt for U16 AAA hockey’s biggest prize.

Here’s a look at tonight’s matchups:

The Senators finished as the second place team in the GTHL regular season standings, finishing with a record of 24-3-1 before a disappointing playoff showing saw them finish outside of the league’s final four. The Sens have come back with a vengeance though, scoring 29 goals through five contests with underage talents Michael Misa (6-6–12) and William Moore (6-2–8) at the forefront. Misa scored twice in a 4-1 quarter-final win over the London Jr. Knights.

The Majors, to their credit, are a perfect 5-0 at the OHL Cup, surrendering a tournament-low five goals in as many games. The Majors bested their cross-town rivals the Markham Waxers 5-1 in quarter-final action as blueliner Zayne Parekh led the way with two goals and an assist. Parekh leads Markham offensively with eight points (3-5–8).

The Sens have had success against their Markham opponents this season, defeating them in Semi-Final matchups at both the Sylvia Jacobs Tournament back in October as well as the Whitby Silver Stick in November. The Sens defeated the Majors 4-0 in regular season play back on December 12th before the two teams played to a tie on March 5th.

Two teams entirely unfamiliar with each other clash at 8:00pm as the GTHL champion Toronto Jr. Canadiens put their undefeated record on the line against a Quinte Red Devils squad that keeps finding ways to win.

JRC carried the momentum of a championship run through the GTHL Playoffs into the OHL Cup, rattling off five straight wins as Porter Martone (5-8–13) leads the showcase in scoring, trailed closely by Michael Hage (5-7–12) and Jack Van Volsen (5-5–10).

The top-ranked team in the final edition of the OHL Cup Top 10 Rankings, the Jr. Canadiens were winners of the Sylvia Jacobs Tournament as well as the Whitby Silver Stick and are now looking to add to their decorated season, but not before they find a way to deal with the Quinte Red Devils, whose hard-nosed defence corps has shown resilience and an ability to hang around in games against skilled opponents.

Quinte played to an undefeated regular season record of 23-0-3 before running into some challenges come playoff time. They placed fourth at the OMHA championships following an overtime loss to the Hamilton Jr. Bulldogs, but have come to the OHL Cup and played in a number of tight, low-scoring games. Their lone loss came at the hands of the Markham Majors before they rebounded with consecutive 2-1 wins secured by game winners off the stick of Ethan Toms.

The Red Devils have some season accomplishments of their own, winning the Wendy Dufton Tournament in October while also placing first in the OMHA’s ETA circuit. They reached the quarter-finals of the Whitby Silver Stick before falling in the eighth overtime against the Ajax-Pickering Raiders in an unprecedented 2-on-2 scenario.

Quinte is into the semi-finals for the first time since 2009 when a team that included present-day NHL forward Nick Cousins fell to Boone Jenner and the Elgin-Middlesex Chiefs by a score of 2-1.

The Jr. Canadiens missed out on the OHL Cup in 2019, but are back in a semi-final scenario after winning it all with a group that included Zayde Wisdom (Kingston Frontenacs), Daniil Chayka (Guelph Storm) and Shawn Spearing (Peterborough Petes) in 2018.