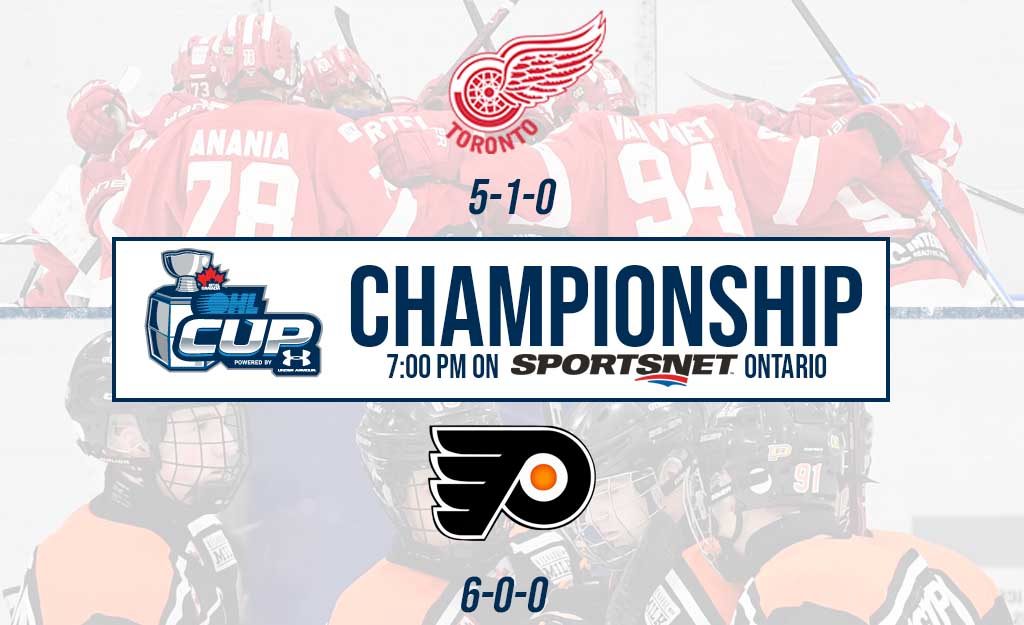 For the third straight year it’s an all-GTHL Championship Final at the OHL Cup Powered by Under Armour as the undefeated Don Mills Flyers take on the surging Toronto Red Wings.

The undefeated @DMFlyersAAA will face off against the @GthlRedwings tonight at 7pm in the #OHLCup powered by @UnderArmour Championship Final at @MattamyAC. Admission is free. Watch the action live on @Sportsnet Ontario.

Wright and Fantilli hit the ice on Sportsnet Ontario tonight as the Red Wings and Flyers meet for the eighth time this season. The Flyers won twice and played the Wings to a 3-3 tie during the regular season before eliminating them in the second round of the GTHL Playoffs, winning three times while battling to a pair of ties.

“We had a series against them and to be honest, we very close,” said Angelo Catenaro, head coach of the underdog Red Wings who wrapped up the season as the seventh-ranked team in the weekly Top 10 Rankings.

“In a one-game showdown, if we all come ready to play, stick to the plan and play with discipline, we’ve got a shot to beat anybody.”

The Red Wings have played to a 5-1-0 mark, suffering their lone loss to Team NOHA on Thursday. They advance to their first OHL Cup Powered by Under Armour Championship Final since 2006, a year they lost to Steven Stamkos, Michael Del Zotto and the Markham Waxers.

“At the start of the year our goal was to win the OHL Cup, now we’re here and we have to get the job done,” said Red Wings captain Francesco Pinelli who leads the team with 11 points (6-5—11). “We’re going to have to come out physical, get the puck in behind their defence and keep up the intensity.”

Across the ice, the 6-0-0 Don Mills Flyers went wire-to-wire as the province’s top-ranked team, conquering nearly every foe along the way aside from falling to Detroit Compuware in the International Silver Stick Final.

The Flyers strung together 158 consecutive minutes of shutout hockey over a span of three straight shutouts and have surrendered a tournament-low five goals over six games.

The man everyone wants to see, Shane Wright enters tonight’s action at the Mattamy Athletic Centre with a showcase-leading 15 points (7-8—15). He’s joined by a supporting cast that includes Brennan Othmann (6-5—11) and Francesco Arcuri (4-7—11) up front.

“What more can you ask for,” Wright said with a smile. “We’re playing on Sportsnet. Every guy is going to be up for this one. I can’t wait to hit the ice.”

The Flyers are in pursuit of their first-ever OHL Cup Powered by Under Armour title after losing the Final to the Toronto Marlboros in both 2015 and 2011.

Regardless of tonight’s outcome, one team will hoist the OHL Cup for the very first time in the Minor Midget Showcase era (2003-present).

The puck drops at 7:00pm from the Mattamy Athletic Centre in downtown Toronto. Catch the OHL’s stars of tomorrow on Sportsnet Ontario. Admission to the game is free.