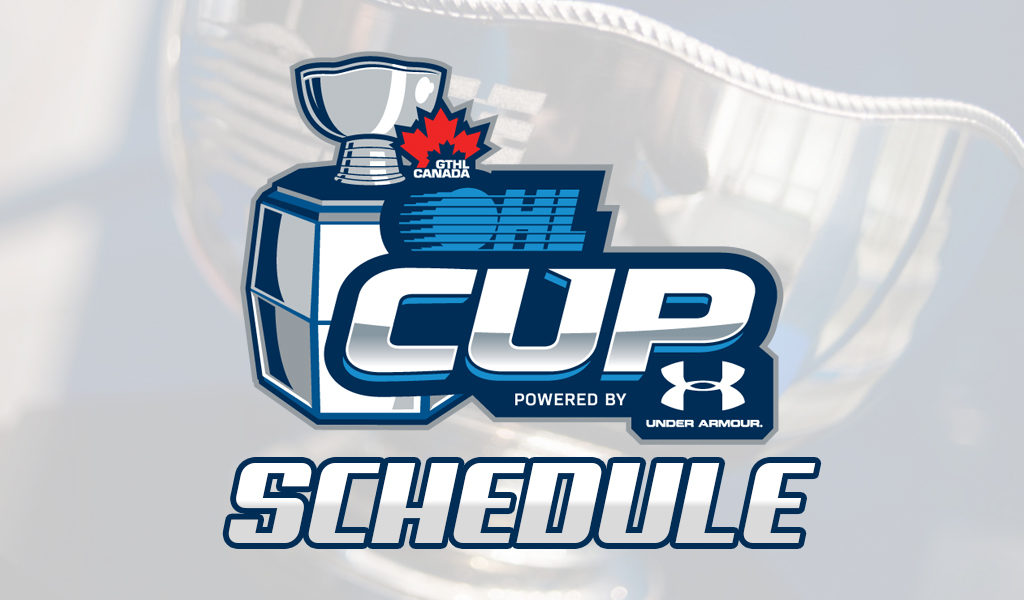 Toronto, ON – The Ontario Hockey League today announced the final schedule for the 2019 OHL Cup Showcase Tournament powered by Under Armour and hosted by the Greater Toronto Hockey League.

The action takes place March 12-18 beginning at Toronto’s Scotiabank Pond with four Wild Card Play-In Games on Tuesday, followed by 40 Round-Robin Tournament Games through Friday.  Quarter-Finals are set for Saturday morning with Semi-Finals being played on Saturday evening.  The Championship Final is set for Monday March 18 and will be played at Mattamy Athletic Centre at 7:00 pm.

All games are available live and on demand through GameOnStream.

All four matchups were randomly drawn on Tuesday March 5 among the eight eligible teams.

The GTHL’s Mississauga Rebels and Mississauga Senators secured their positions in Wild Card Play-In Games by winning their Wild Card Series matchups over the North York Rangers and Vaughan Kings respectively.  The OMHA’s Guelph Gryphons were awarded a Wild Card Play-In Game position by virtue of finishing fifth place in the league’s championship tournament.  The Niagara North Stars qualified after winning an SCTA Consolation matchup over the Southern Tier Admirals.  The ALLIANCE’s Waterloo Wolves secured entry by finishing fourth in league playoff standings.  The London Jr. Knights, North Central Predators, and North York Rangers are competing in Wild Card Play-In Games as chosen by the Tournament Selection Committee based on performance throughout the 2018-19 season.

The four winners of the Wild Card Play-In Games will join 16 other clubs who earned their qualification through league play and regional representation.

The four losing teams in the Wild Card Play-In Games will compete in a playoff for the one spot previously assigned to Detroit Compuware who has withdrawn from the event.

The two winning teams from these Consolation semi-finals will play Wednesday at Scotiabank Pond #1 at 7:30 am with the winner becoming WC5 in the Shanahan Division.

Monday’s Championship Final will be broadcast live on Sportsnet Ontario.

The showcase provides fans and scouts one last opportunity to see many of the top minor midget aged players from across Ontario and parts of the United States compete for the OHL Cup performing against the best competition prior to the 2019 OHL Priority Selection.