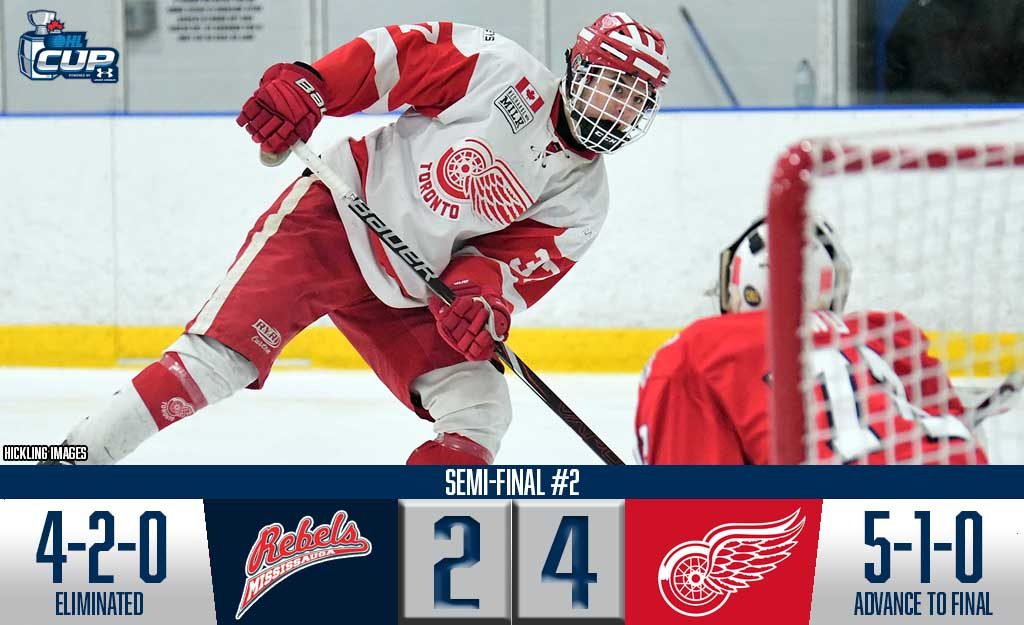 Shane Wright scored a hat-trick, but another 2004-born talent followed-up with a big performance of his own.

Down 2-1 early in the third period, Fantilli connected with Ryan Gillespie to knot things at three before finishing on a centering pass from Francesco Pinelli with 6:53 remaining to put the Wings ahead for good.

“Our line has been doing that all year,” said Fantill of his unit alongside Pinelli and Gillespie. “We had a chat between the second and third and we decided that we had to really pick it up and we didn’t want to be a team that went out in the semis.

“We wanted to play on Sportsnet and make it all the way through.”

Nolan Dann (2) would seal the deal with an empty netter, sending the Red Wings to the OHL Cup Powered by Under Armour Championship Final for the first time since 2006.

“We got off to a slow start this year but these guys have always been determined, they’ve always battled and I’m very proud of them,” said head coach Angelo Catenaro. “They deserve to be in the Final and we’re going to show up on Monday night with the goal of winning a championship.”

Mississauga’s Max Donohoe (4) scored on a first period penalty shot before Pasquale Zito (4) put the Rebels up 2-1 just 29 seconds into the third period.

Justin Wu turned in another strong outing, earning Player of the Game honours for his team with 23 saves across from Toronto’s Josh Rosenzweig who improved to 5-1 with 22 saves of his own.

The Red Wings advance to face the 6-0 Don Mills Flyers for the OHL Cup on Monday night at the Mattamy Athletic Centre in Toronto. The game will be aired live on Sportsnet Ontario starting at 7:00pm.