Eastern Ontario comes together for win over Thunder Bay 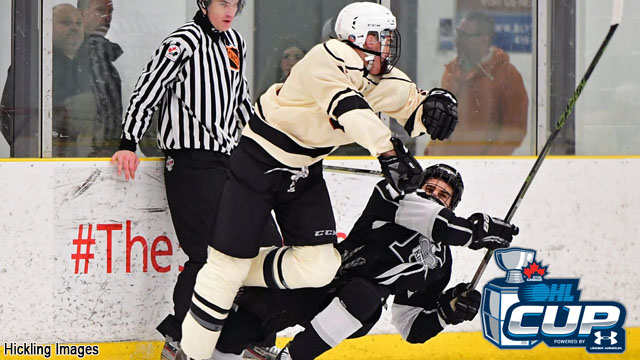 Though they’ve only practiced together a few times, the Eastern Ontario Wild looked like they had some chemistry going first thing Wednesday morning, taking a 3-1 win over the Thunder Bay Kings to begin the showcase.

Nicolas Chartrand, Kieran Craig and Alex Johnston had goals while goaltender Luke Cavallin made 20 saves in the win.

“It’s funny, you grow up battling these guys but now we’re playing together and it’s a lot of fun,” said Johnston, who plays for the Kanata Lasers Midgets. “Me, Louis (Chabot) and Curtis (Fabbro) were finding each other out there and I was pretty impressed with our first game here.”

The Wild won an HEO Bantam title last season, but several players like Johnston have been added from other teams throughout the Ottawa region.

“I think it will take more time to get better at the systems we want to play, but for a first game it was pretty good,” he added.

Keighan Gerrie, who was Thunder Bay’s leading scorer during the regular season, had the lone goal for the Kings in the loss.