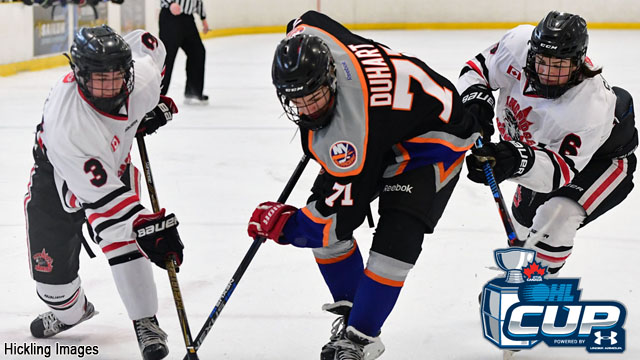 Dalton Duhart’s OHL Cup debut was a memorable one.

The Detroit Belle Tire U16 forward buried a hat-trick to lead Elite Hockey Group to a 4-2 victory over the Cambridge Hawks in a back-and-forth contest.

The Hawks didn’t quit, outshooting Elite Hockey Group 13-7 in the third frame but had a hard time finding a way past Jacob Zacharewicz in the EHG crease.

“Not the start I expected but (Matthew) Crasa was feeding me the whole game and put me in some pretty nice positions,” said Duhart. “A lot of our guys are used to playing against each other but it turns out playing together is great.”

Michael Posma provided the other goal for Elite Hockey Group while Cambridge markers came from Steve Grant and David Anderson.

“The whole Canada/U.S. rivalry is pretty intense,” Duhart added. “Cambridge has a good team and they played us hard. We’re looking forward to seeing what the rest of the tournament has in store.”