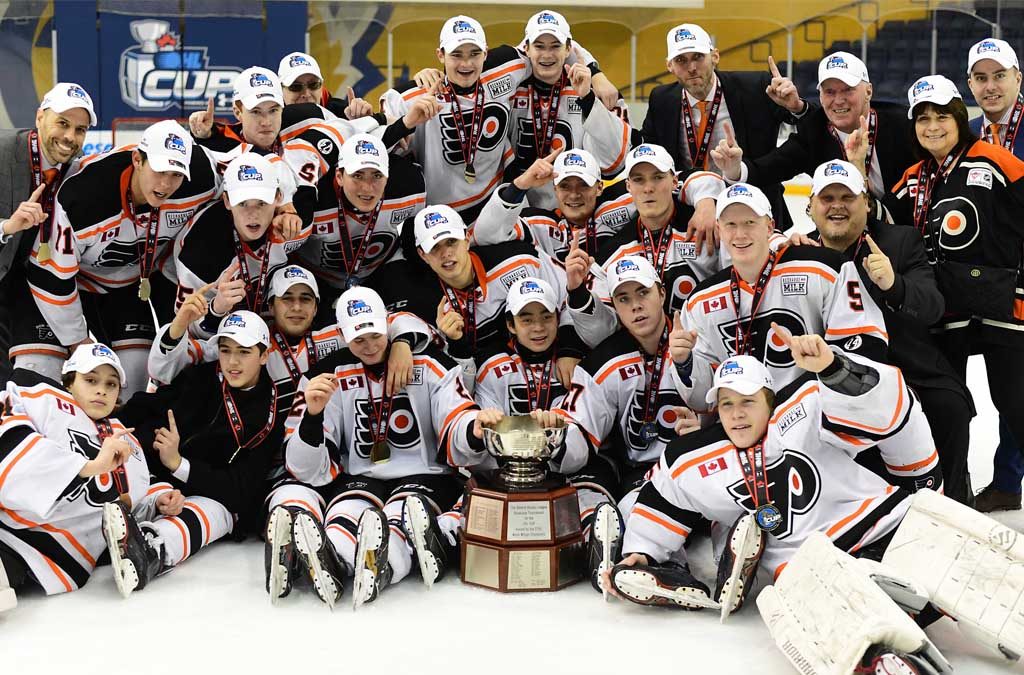 Shane Wright set up Brennan Othmann with 1:30 left in overtime as the Don Mills Flyers overcame a 4-1 deficit to defeat the Toronto Red Wings 6-5 and capture their first OHL Cup Powered by Under Armour Championship.

Blueliner Brandt Clarke sent Wright and Othmann off to the races on a two-on-one with a high flip through the neutral zone as the former fed the latter who lifted a high shot up and over Red Wings goaltender Josh Rosenzweig.

Shane Wright makes a 2-on-1 pass to Brennan Othmann who buries it to crown @GTHLHockey’s @03DMF the 2019 #OHLCup powered by @UnderArmour Champions. pic.twitter.com/tOIlvpr7eu

“It’s amazing. I can’t take credit for it,” said overtime hero Othmann moments before getting a celebratory shower from his teammates. “I have great teammates and Shane made a beautiful pass. I just saw the opening and I buried it.”

It’s more than just another win for the Flyers, a team that lost just once all season. The boys in black and orange celebrated the memory of fallen teammate and former goaltender Roy Pejcinovski who passed away just over a year ago.

“It’s an exciting night obviously. It is sad though, we do miss Roy,” said Flyers head coach Marc Slawson. “We feel like he was here tonight supporting us. We feel like he’s been with us all season and had our back. A big shout out to Vaz and Victoria. We miss them, we love them and Roy will always be a part of this team.”

With an assist on the game winner, exceptional status OHL Priority Selection prospect Shane Wright earned Tim Adams Tournament MVP honours, finishing the game with a goal and two helpers for an overall total of 18 points, one shy of Connor McDavid’s 2012 event record.

“It’s incredible, just to have this moment and to take in what just happened,” said Wright. “Coming back from down 4-1 to win in overtime. It’s a brotherhood in that dressing room. We all came together, stayed calm and focused on what we had to do.”

Sending pucks to the net paid off for the Red Wings early as Justin Ertel (3) snapped a shot past Don Mills’ Anson Thornton from the top of the circle just 1:41 into action.

Toronto blueliner Owen Simpson put the Wings up 2-0 at 7:30 before Othmann did laymen’s work down low to set up Wright and give the Flyers some life with 4:06 left in the period.

The Red Wings reinstated the two-goal lead before the first expired though as a Francesco Pinelli (7) power play one-timer spelled an end to Thornton’s night at 13:16 as Sergei Litvinov took over in the Don Mills crease.

Don Mills’ play improved after Toronto defenceman Chandler Romeo (1) followed up his own rebound to put the Wings up 4-1 inside the opening minute of the second.

Francesco Arcuri found a streaking Edward Moskowitz (5) coming down the middle at 3:55 to cut the lead to two before the high-scoring Othmann (7) finished off a nice play between Arcuri and defenceman Paul Christopoulos entering the zone at the midway point of the frame.

With the Red Wings up 4-3, the second period came to an exciting end after Rosenzweig denied Don Mills’ Brandt Clarke of a sure goal on the doorstep before Toronto’s Noah Filice hit iron inside the final two minutes of action.

Liam Arnsby (1) knotted the score at four with a tip in the high slot 1:25 into the third period but Red Wings underage sniper Adam Fantilli (5) neutralized that momentum with a shot from down the left wing to put Toronto back in front 5-4.

The Flyers drew even again with 4:05 to go as Arnsby took out his man in the corner, allowing Edward Moskowitz to come up with the puck and find a waiting Alex Christopoulos (6) who ripped a high shot over the shoulder of Rosenzweig.

The OHL Cup Powered by Under Armour Final went to overtime for the third time in the past five years as Wright fed Othmann in a thrilling finish.

Don Mills outshot Toronto 30-27 while the Red Wings went 2-for-2 on the power play.

Thank you to all the players, parents, bench staff, officials, and volunteers who made the 2019 #OHLCup powered by @UnderArmour a huge success. Congrats to the @DMFlyersAAA! pic.twitter.com/EjVSy2EquB

The Toronto Red Wings end their showcase with a 5-2-0 record, outscoring opponents 29-18. They were led in scoring by captain Francesco Pinelli (7-7–14) while Luca Del Bel Belluz (6-2–8), Ryan Gillespie (0-8–8) and Adam Fantilli (5-2–7) also frequented the scoresheet. Goaltender Josh Rosenzweig played all seven of the team’s games, finishing with a 2.44 goals-against average and an .883 save percentage.

The Flyers played to a perfect 7-0-0 record, becoming the first champion to do so since the 2012 Mississauga Rebels. They tied the 2008 Toronto Jr. Canadiens’ event record 41 goals for while surrendering just 10. Wright (8-10–18) led the way offensively followed by Othmann (8-6–14) and Francesco Arcuri (4-9–13). Brandt Clarke’s 11 points (2-9–11) are the most by a defenceman in showcase history, surpassing the prior mark of 10 points set by Roland McKeown (Toronto Marlboros) in 2012. Goaltenders Thornton and Litvinov finished with sub-1.60 goals-against averages and save percentages of .909 and .910 respectively.