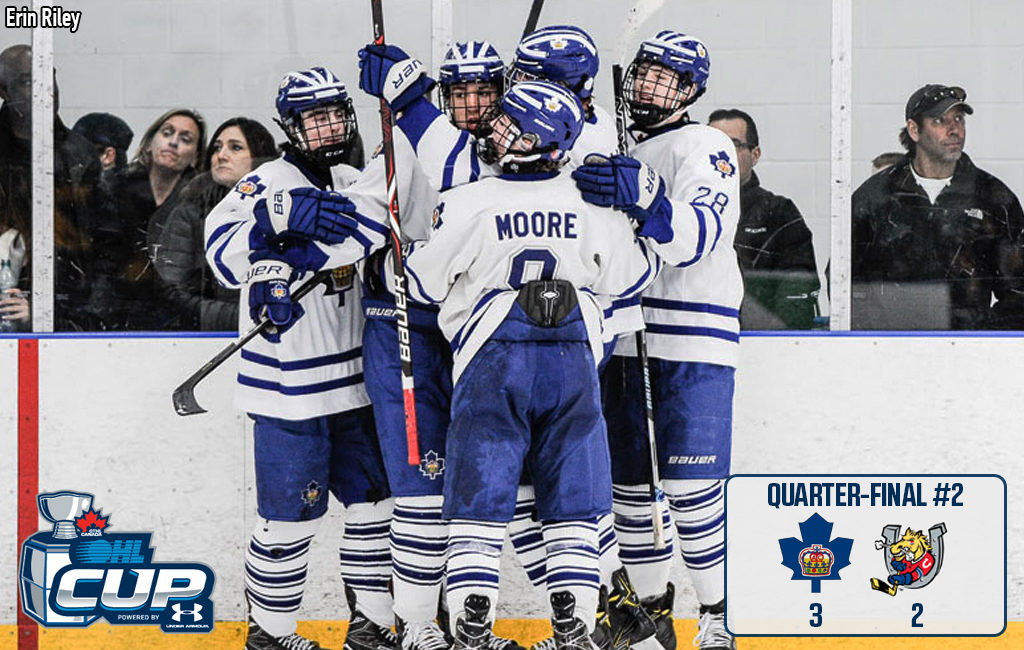 Will Cuylle (7, 8, 9) completed the second of back-to-back hat-tricks, scoring the game winner with 5:38 remaining in the third period to carry the Toronto Marlboros past the Barrie Colts 3-2 in quarter-final action.

After Cameron Snow (3) opened the scoring for Barrie, Cuylle responded shorthanded 21 seconds into the second period and proceeded to put the Marlies in the lead on the power play with 21 seconds left in the frame.

Barrie’s Rylee Hlusiak (2) evened the score at two early in the third before Cuylle’s unassisted game winner made the difference, sending the Marlboros back to the semi-final after missing out last year.

“I guess I’ve got a hot stick right now, but that doesn’t mean anything if your teammates don’t find you,” said Cuylle. “We’re one step closer to our ultimate goal and that’s to win the OHL Cup. I got a hat-trick but we don’t win that game if everyone isn’t doing their job.”

Cuylle now leads the OHL Cup in scoring by a three-point margin, registering nine goals and three assists for 12 points over five games.

The Marlboros outshot the Colts 30-11 over the final two periods for a game total of 46-25.

Barrie sees its season come to an end, playing to a 3-1-1 mark at the 2018 OHL Cup powered by Under Armour. The Colts were led in scoring by Tyson Foerster (5-4–9) while teammate James Hardie (3-5–8) trailed close behind.

After winning a Silver Stick title and a GTHL Championship, the Marlboros are chasing their third major championship this season as they go up against the Toronto Jr. Canadiens in semi-final action at 6:00pm.

Will Cuylle snipes his first of three goals for the Marlboros.