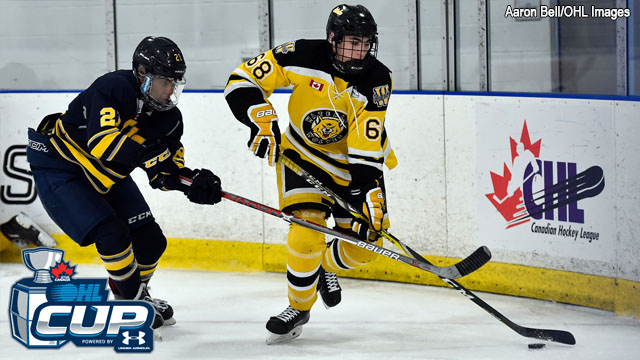 He might be the smallest guy on the ice, but fleet-footed defenceman Jaden Condotta has had a big impact at the OHL Cup.

Condotta had three assists in the Titans’ 7-1 Wild Card Play-In victory over Kitchener on Tuesday and put his team in good shape headed into a two-game Friday with his OT winner against Waterloo.

“I had a lot of time, found a lane and just hit the spot that I was aiming for,” he said with a smile after the goal. “I saw that their goalie was screened by his own defenceman so I just took advantage of that.”

Titans goaltender David Cunti made some big saves late in the third period to keep the score tied at one.

“He saved us a couple times,” Condotta added. “We probably wouldn’t have gotten into overtime without some of the saves he made.”

The Wolves fall to 0-2-1 and with just one game remaining, won’t be able to qualify for Saturday’s playoff round. The Titans improve to 1-1 and prepare for a pair of games on Friday with matchups against Whitby and Team NOHA.