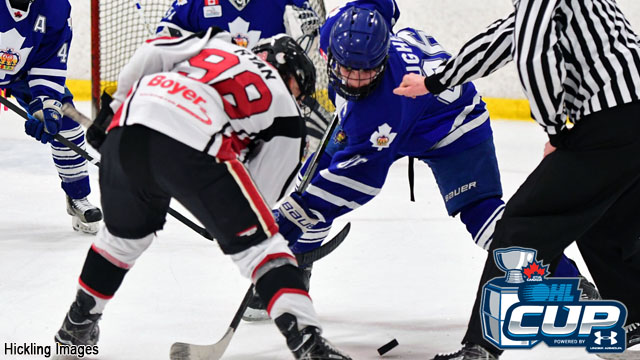 The Toronto Marlboros are off to a good start at the 2017 OHL Cup Powered by Under Armour, defeating the Ajax-Pickering Raiders 3-2 on opening night.

The trio of Jack Hughes, Graeme Clarke and Daniel Torrealba controlled the pace of the play when they set foot on the ice as Hughes and Clarke both had goals in the win while Nicholas Zabaneh also scored.

The Marlboros outshot the Raiders 36-20 in a hard-fought game.

“We’re all best friends and we have a lot of fun playing together,” said Clarke, who received Player of the Game honours for the Marlboros. “Ajax came back strong against us in the third period and we kind of had to hold them off, but overall I think our team played hard and it feels good to win the first one.”

The Marlboros entered play off a seven game GTHL Championship Series loss to the Mississauga Rebels. The win enables them to put that loss in their rearview mirror.

“It’s one we’re going to put behind us,” Clarke continued. “We’re here now and focused on our goal.”

Damon Beaver made 33 saves in the loss for the Raiders while Matthew Altomare and Cole Spencer provided goals. Ajax-Pickering looks to bounce back on Wednesday against the Eastern Ontario Wild.