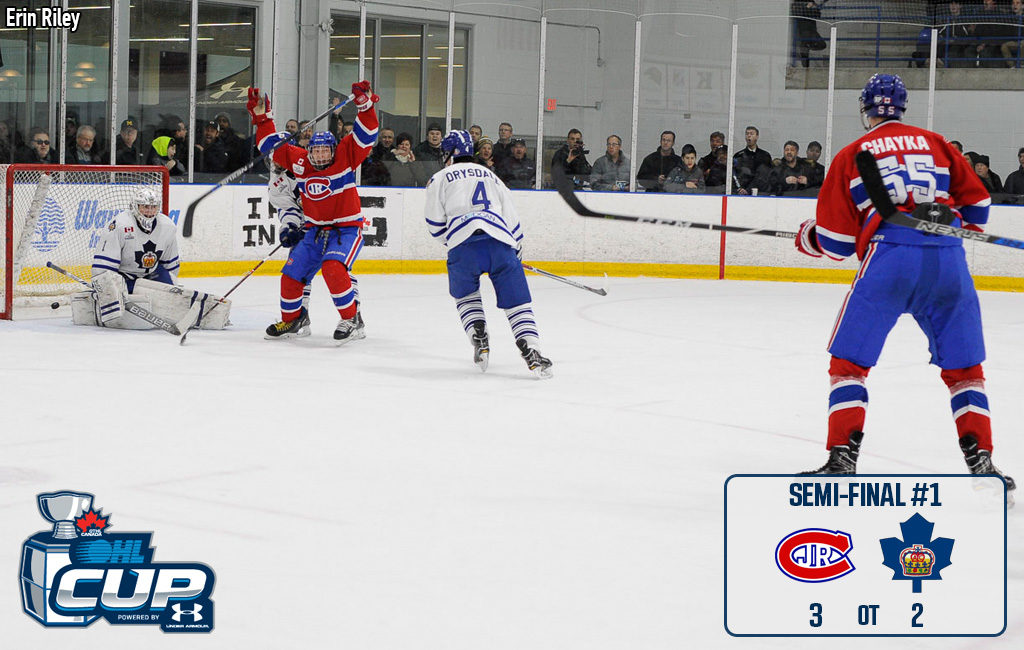 The Toronto Jr. Canadiens are going to the big dance.

Blueliner Daniil Chayka (4) jumped on a rebound 1:33 into overtime, putting a shot past Connor MacKenzie to lift JRC over the rival Toronto Marlboros 3-2 to advance to their first OHL Cup Final since 2014.

“It’s amazing, I don’t know how else to say it,” said Chayka, a Russian rearguard playing his first season in North America. “I was just standing out in front of the net and the rebound came out to me and I took a shot. I think it’s the biggest goal I’ve ever scored.”

Ryan Tverberg picked up his second assist of the night on the winner after setting up defenceman Michael Bianconi (3) with 2:47 left in the third period on the goal that tied the score at three.

Dylan Robinson (5) also scored for the Jr. Canadiens while netminder Sami Molu stopped 29 of the 31 shots he faced.

“We’ve had a long-time rivalry with the Marlies and for it to come down to us in the OHL Cup Semi-Final and for it to end the way it did was like a storybook ending,” said Jr. Canadiens head coach Dan Sisca. “I’m proud of our guys. It was a back-and-forth game right down to the end and we didn’t quit.

“We persevered and deserved this win.”

Stephen Halliday (6) and Reid Valade (3) scored Marlie goals as the GTHL champions see their OHL Cup run come to an end with a 5-1-0 record.

The Jr. Canadiens will square off against the winner of a matchup between the York-Simcoe Express (5-0-0) and Vaughan Kings (4-0-1) in the 2018 OHL Cup powered by Under Armour Championship Final on Monday night at the Mattamy Athletic Centre in downtown Toronto.

Daniil Chayka wins the game in overtime for the Jr. Canadiens.