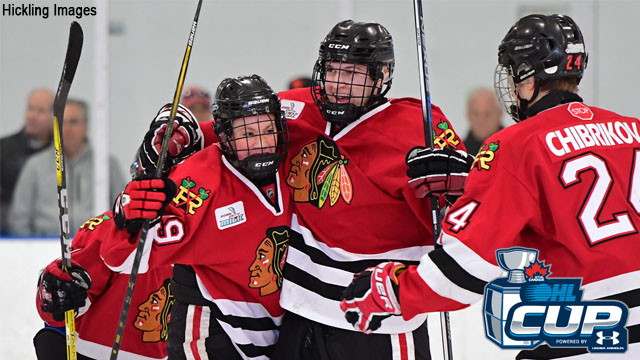 The Mississauga Reps have overcome their share of disappointment over the past month, but a 5-2 Wild Card Play-In win over the Halton Hurricanes signals a new beginning.

Cole Burtch had two goals and an assist to lead the Reps to victory in the one-game showdown as they’ve put a first round exit to the Vaughan Kings in the first round of the GTHL playoffs behind them.

“It’s been tough, and we’ve had to focus on a few areas of our game and get better,” Burtch said post-game. “It definitely feels good to have one of my best games of the season though. It was the right time to do it.”

Tye McSorley, Daniel Bazarin and Jamieson Rees also scored Mississauga goals while Ty Petizian was a catalyst, collecting three assists. Ryan Dugas was solid in the crease, surrendering two goals in the loss off the stick of Halton’s Lucas Peric and Norm Pitt.

“I thought everyone bought in today and we had success as a team,” Burtch added. “I know we’re all excited about the opportunity to play in the OHL Cup.”

The Reps return to the showcase after missing out last year. They’ll compete in the Shanahan Division alongside the Toronto Marlboros, Ajax-Pickering Raiders, Eastern Ontario Wild and Thunder Bay Kings.