Bulldogs come up big against Jr. Canadiens in opener 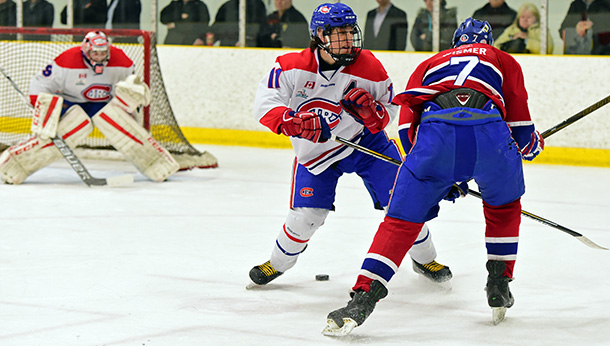 The Hamilton Jr. Bulldogs dug deep in the third period, overtaking the Toronto Jr. Canadiens in the final 20 minutes on goals from Wesley Weir and Marino Moro to take a 3-2 win in their OHL Cup opener.

Goaltender Tanner Sheppard came up big for the Dogs on numerous occasions, earning Player of the Game honours for his team.

The Hamilton win comes on the heels of a loss to the York Simcoe Express in the OMHA finals last week, marking a big bounce back effort to start the showcase.

“We don’t back down from a challenge, and this was certainly a challenge,” said Hamilton assistant coach Joe Porter. “We think we can skate with any team participating this week and roll four lines against them and I think we showed that. The first win of a tournament is always huge.”

Wesley Weir’s marker 3:42 into the third period stood as the difference maker, a goal he scored after leaving the game temporarily in the second period due to illness.

“Wes showed a lot of character tonight coming back to score the big goal for us,” added Porter. “That kind of dedication is what winners are made of.”

Dirk Stadig and Jackson Alexeev gave the Jr. Canadiens a shot in the arm with goals less than three minutes apart in the second period. That momentum would be short-lived though as Hamilton came out strong for the third.

The Jr. Canadiens had the benefit of Ryan Merkley on the blueline. The top draft eligible defender has missed time due to injury of late but saw plenty of ice on Tuesday.

The two clubs are back in action on Day 2 of the 2016 OHL Cup on Wednesday.