Brampton comes back late to steal point from Jr. Canadiens 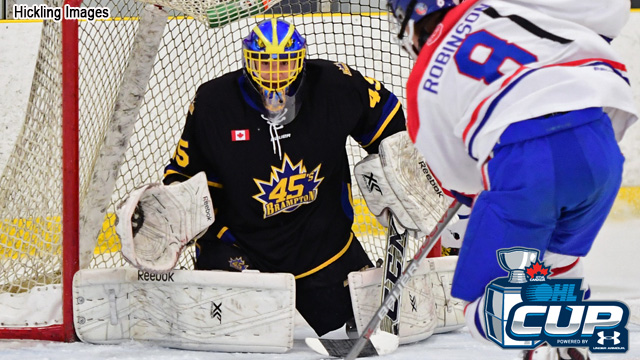 The Brampton 45’s knew they’d be playing their final game of the season and they left it all out on the ice.

Though they didn’t come away with the win they were hoping for, they did make life difficult for the Toronto Jr. Canadiens as Brayden Guy tied the game with 22 seconds left as the 45’s stole a precious point from JRC in a 2-2 tie.

Being a part of the first 45’s team to ever play in the OHL Cup Powered by Under Armour is an honour for players like Guy.

“I grew up playing in Brampton and I know for myself and the guys who are from the area, it’s been a really special experience to be able to represent the organization and the city,” he said. “We came a long way to get here and to have had the opportunity to compete against the top teams and players from across Ontario and the United States is something I’ll always remember.”

Andrew Horsley brought Brampton to within one 7:51 into the second period before Guy’s late game-tying goal that came on an assist from Remy Dalben.

Sebastian Labora turned aside 26 shots for the 45’s, surrendering a pair of goals off the stick of Jr. Canadiens forward Justin Randhawa.

The Jr. Canadiens await the result of a Friday afternoon game between the London Jr. Knights and the TPH Thunder to determine their quarterfinal fate.

Brampton played to an 0-2-2 record at the 2017 OHL Cup Powered by Under Armour, being led in scoring by Guy, Dalben and Christopher Ishmael who recorded three points each. Labora was in goal for both Brampton ties, recording a 1.80 goals-against average and a .951 save percentage in the process.