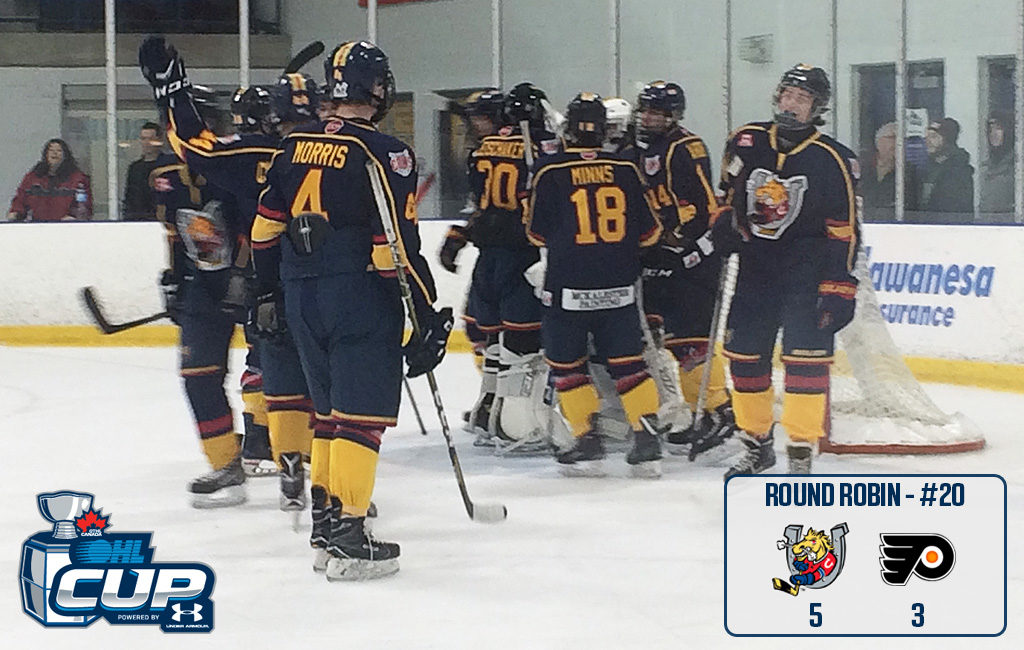 The big unit of James Hardie (2), Tyson Foerster (1, 2) and Caleb Minns combined for four goals as the Barrie Colts prevailed over the Don Mills Flyers 5-3 to close out Day 2 of the 2018 OHL Cup Powered by Under Armour.

William Portokalis (1, 2) scored a pair of third period goals to pull Don Mills within a goal down 4-3 before Cameron Snow (2) gave the Colts insurance for a 5-3 final.

“We knew this would be an important game and I think we played really well as a team, which is an improvement on how we performed at OMHA’s,” said Hardie after the win. “Our line really clicked and it feels good to make a big difference in an event like this one.”

Hardie had a goal and three primary assists while Foerster scored twice, added an assist and posted a plus-5 rating. Blueliner Brett Pearce (3) also scored for the Colts as they improve to 2-0-1 for a first place tie with the Toronto Jr. Canadiens atop the Subban Division.

Barrie netminder Rhys Baberg made 31 saves as the Colts won despite being outshot 34-26.

Jonah Jacksteit (1) joined Portokalis on the scoresheet for Don Mills as the Flyers fell to 0-2-0.

The Flyers are back in action on Thursday against Thunder Bay (0-2-0) at 1:45pm while the Colts take on Thunder Bay on Friday at 3:00pm.