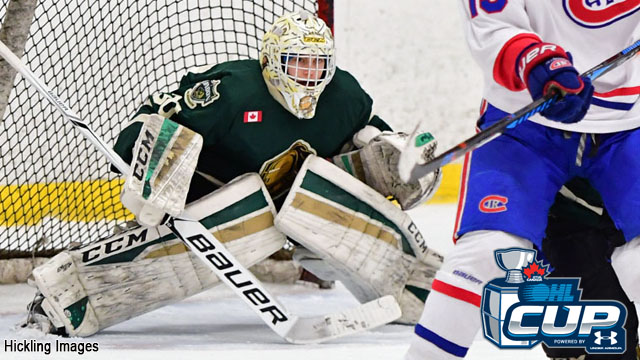 Owen Say turned in a flawless performance to backstop the London Jr. Knights to a 3-0 shutout win over the Toronto Jr. Canadiens.

Known for their scoring pedigree, the Jr. Knights are often filling the net, but solid goaltending was a theme on Tuesday as Say and Jr. Canadiens Player of the Game Joe Howe were solid in the crease.

“Our guys didn’t have their best game in the first two periods, but I’m glad I could be back there to help them out,” said Say following the final buzzer. “All season they’ve helped me out, so I’m glad I could come up with a few big saves for them.”

Levi Siau broke the offensive silence with just under four minutes to go in the second period before Bryce Lewis and Peter Fleming added to the London lead for a 3-0 final.

“All through my minor hockey career people have always wondered if we can compete with GTHL teams, but I thought we did a pretty good job tonight,” Say added. “You can’t afford to take a night off at this tournament and we don’t intend to.”

Ryan Suzuki and Brett Budgell each pitched in with two assists for London as the Jr. Knights get off on the right foot at the 2017 OHL Cup.