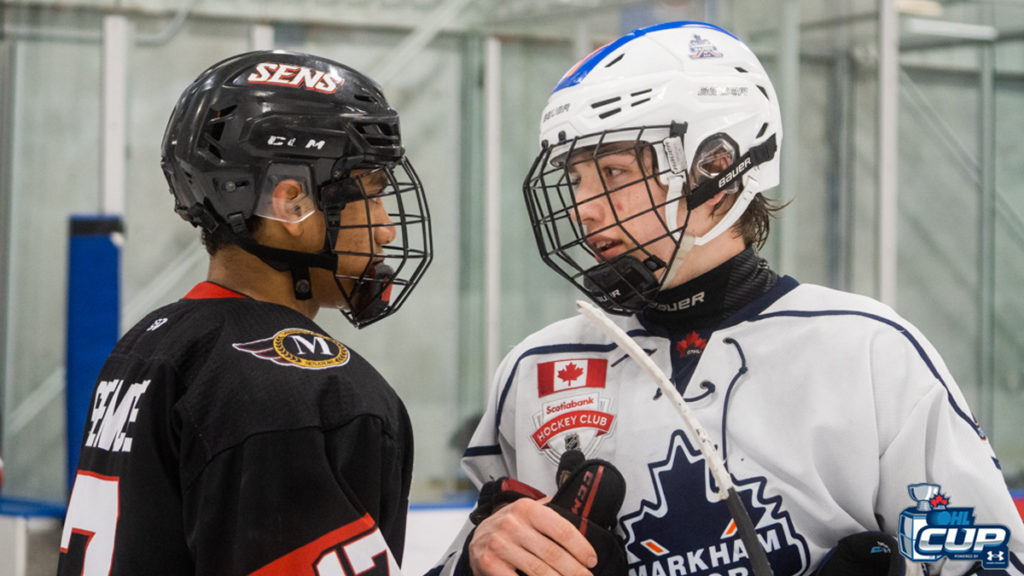 Toronto, Ont. – The 2022 OHL Cup Showcase Tournament powered by Under Armour and hosted by the Greater Toronto Hockey League is down to two teams as the GTHL’s Mississauga Senators and Toronto Jr. Canadiens emerged victorious following this morning’s Quarter-Finals and this evening’s Semi-Final contests.

The GTHL champion Toronto Jr. Canadiens are into the OHL Cup Championship Final with a perfect 6-0 record, defeating the Quinte Red Devils by a score of 5-1 in Semi-Final play. The Jr. Canadiens defeated the Vaughan Kings 5-2 in Saturday morning’s Quarter-Final action.

The wild card entry Mississauga Senators are Championship-bound, improving to 5-1 following a 5-2 victory over the GTHL finalist Markham Majors. The Sens eliminated the London Jr. Knights by a score of 4-1 in Saturday morning’s Quarter-Final contest.

The 2022 OHL Cup Championship Final on Monday at 7:00pm features two GTHL teams ranked inside the OHL Cup Top 10 Rankings throughout the season, with the top-ranked Jr. Canadiens poised to face the third-ranked Senators for the sixth time this season. Be sure to catch all of the action live from the Mattamy Athletic Centre streaming on CHL TV (sign up for an account here) as well as aired across the province on the OHL Action Pak.

Here’s a look at Saturday’s results:

Monday’s Championship Final will be broadcast live on CHL TV and across the province on the OHL Action Pak.

Fans interested in attending Monday’s Championship Final are able to do so free of charge. Per Ryerson University’s current Covid-19 protocols, please be prepared to show proof of vaccination and abide by the University’s masking protocols while inside the Mattamy Athletic Centre. Visit ryerson.ca/covid-19 for full details

The showcase provides fans and scouts one last opportunity to see many of the top U16 AAA players from across Ontario and parts of the United States compete for the OHL Cup performing against the best competition prior to the 2022 OHL Priority Selection set to take place April 29th and 30th.