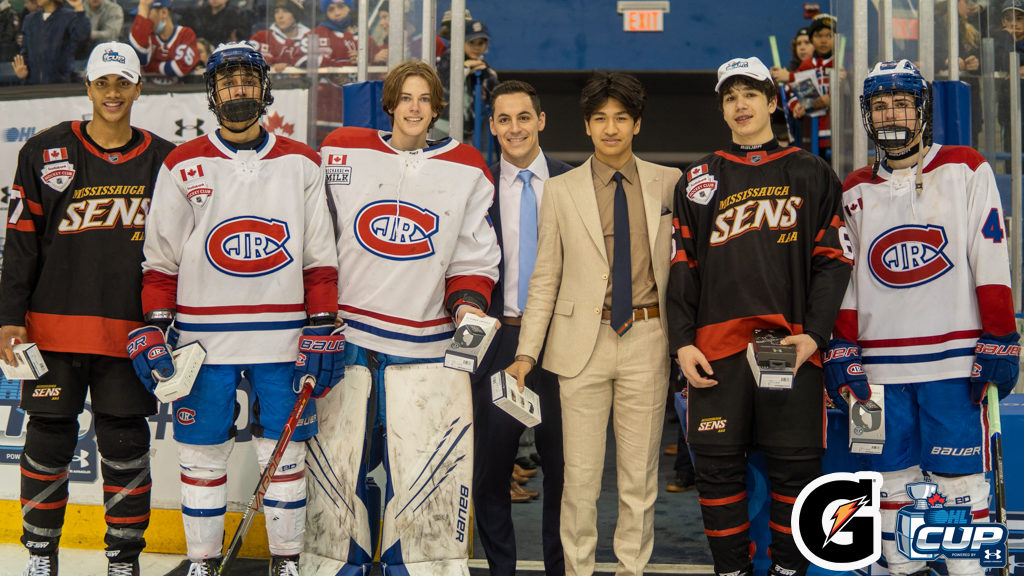 Six players have been named to the 2022 Gatorade OHL Cup All-Star Team, a selection of the annual showcase’s top performers as chosen by OHL Central Scouting.

Forward – Michael Misa (Mississauga Senators)
7 GP, 10 G, 10 A, 20 PTS.
Mississauga Senators underage forward Michael Misa led all players with a new tournament record 20 points (10-10–20) over seven games. His hat trick and five points in the OHL Cup Championship Final are both new showcase benchmarks as he helped the Senators win the first OHL Cup title in their history. After recording two assists in wild card play, Misa had points in six of seven tournament matchups, with multi-point outputs in each instance. He finished tied for the showcase lead in shots on goal with 31 and won 52 of his 83 faceoffs, good for a 62.7 percent success rate. Misa also led all players with three game winning goals. He follows Shane Wright (2018) and Connor McDavid (2012) as the third underage player to earn OHL Cup MVP honours.

Forward – Michael Hage (Toronto Jr. Canadiens)
7 GP, 7 G, 9 A, 16 PTS.
Toronto Jr. Canadiens forward Michael Hage was near the top of the showcase scoring list from beginning to end, finishing with a club-leading 16 points (7-9–16) for the OHL Cup Finalist Jr. Canadiens. Hage had points in all seven games for JRC, headlined by a five-point effort (2-3–5) in a 9-3 win over the Hamilton Jr. Bulldogs. Hage was a force in Semi-Final action, scoring twice while adding an assist in a 5-1 win over the Quinte Red Devils. His 31 shots on goal are tied for the showcase lead and he took the most faceoffs of any player, going 70-for-130, good for a 53.8 percent success rate.

Mississauga Senators forward and GTHL U16 AAA Player of the Year Malcolm Spence put up 13 points (6-7–13) and found the scoresheet in five of seven tournament outings. He picked up three assists in an 11-4 win over the Hamilton Jr. Bulldogs and scored a hat trick as the Senators defeated the Elgin-Middlesex Chiefs 7-3. Spence logged multi-point performances in both the Semi-Finals and Championship, with a goal and two helpers in the Final against the Jr. Canadiens. Spence’s 31 shots on goal were tied for the tournament lead.

Toronto Jr. Canadiens defender Anthony Cristoforo led all blueliners with nine points (2-7–9) as his team played to a 6-1 record. Cristoforo found the scoresheet in four of his team’s games, starting with a bang by producing four assists in a 5-3 win over the Mississauga Senators in round robin play. He added a goal and two assists in a 9-3 win over the Hamilton Jr. Bulldogs and scored a goal in the Championship Final, blasting home a one-timer on the power play. Cristoforo’s 16 shots on goal were third for third among tournament blueliners.

Markham Majors blueliner Zayne Parekh makes the Gatorade all-star team with his three goals tied for the most among tournament defencemen. Parekh led the Majors with eight points (3-5–8), helping them reach the Semi-Final. He put points on the board in four different games, most prominently scoring twice while adding an assist in the Majors’ 5-1 Quarter-Final win over the cross-town rival Markham Waxers. Parekh’s 16 shots on goal were third for third among tournament blueliners.

Toronto Jr. Canadiens netminder Carter Frost played to a perfect 3-0 mark, stopping 46 of the 48 shots that came his way. Frost stopped all 11 shots he faced in a 7-0 win over the Elgin-Middlesex Chiefs, turned aside 14 of 15 in a 4-1 win over TPH Hockey and backstopped JRC to a Semi-Final win over the Quinte Red Devils, stopping 21 of 22. 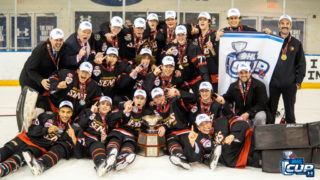