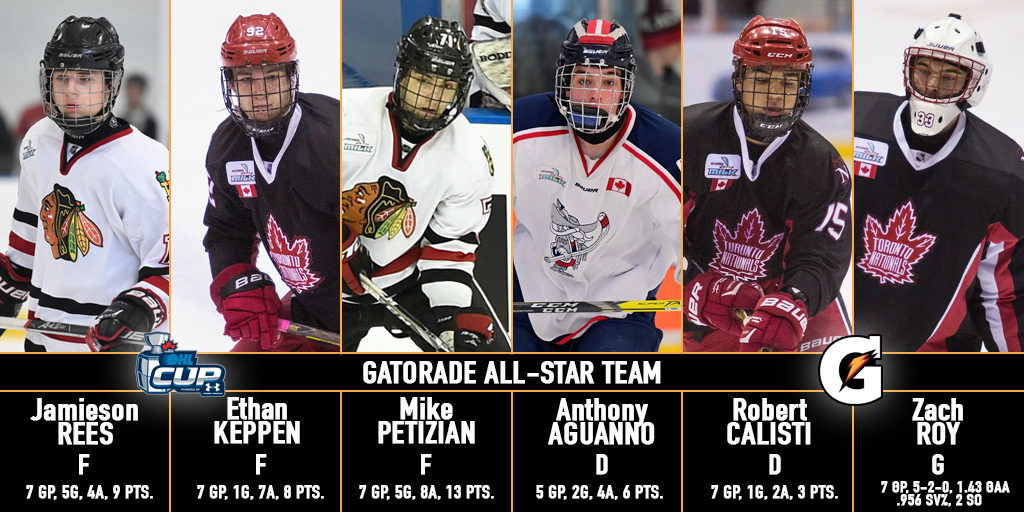 Six players have been named to the 2017 Gatorade OHL Cup All-Star Team, a selection of the annual showcase’s top performers as chosen by OHL Central Scouting.

Forward – Jamieson Rees (Mississauga Reps)
7 GP, 5 G, 4 A, 9 PTS
Mississauga Reps centreman Jamieson Rees finished second in OHL Cup scoring with five goals, four assists and nine points over seven contests and finished tied for the tournament lead in plus/minus with a rating of plus-11. Rees led all players with 33 shots on goal in the showcase, helping guide the Reps to their first ever OHL Cup title. Rees’ game elevated as the showcase progressed as he scored twice in a 3-2 win over the Thunder Bay Kings on Wednesday. He had standout performances in both the Quarter-Final and Semi-Final, registering a goal and two assists in a 5-1 win over the Toronto Jr. Canadiens before scoring twice in a 3-1 victory over the London Jr. Knights.

Forward – Ethan Keppen (Toronto Nationals)
7 GP, 1 G, 7 A, 8 PTS
Toronto Nationals winger Ethan Keppen helped the Nats reach their first OHL Cup Final since 2003, leading the team in scoring with a goal and seven assists over seven contests. Keppen helped the Nationals gain entry to the 2017 OHL Cup with two goals and an assist in a 4-3 Wild Card Play-In win over the Grey-Bruce Highlanders. The Whitby native would go on to string together points in six straight games, highlighted by a three-assist effort in a 4-3 win over Elite Hockey Group on Wednesday night. The 6-foot-2, 200Ib. forward registered an assist in the Nationals’ 3-2 OHL Cup Final loss to the Mississauga Reps.

Forward – Mike Petizian (Mississauga Reps)
7 GP, 5 G, 8 A, 13 PTS
OHL Cup MVP Mike Petizian led all players in scoring with five goals, eight assists and 13 points over seven contests. The Mississauga native helped the Reps gain access to the showcase with a three-assist performance in a 5-2 Wild Card Play-In victory over the Halton Hurricanes on Tuesday. He proceeded to register points in six of his seven OHL Cup matchups, highlighted by a pair of three-point efforts. The 5-foot-7 left-winger recorded a trio of helpers in a 3-2 win over the Thunder Bay Kings on Wednesday and stepped up to record a hat-trick in Saturday’s 5-1 Quarter-Final win over the Toronto Jr. Canadiens. After picking up a pair of assists in a 3-1 Semi-Final win over the London Jr. Knights, Petizian earned Player of the Game honours in the OHL Cup Championship Final, scoring and adding an assist in a 3-2 victory over the Toronto Nationals.

Defenceman – Anthony Aguanno (Mississauga Rebels)
5 GP, 2 G, 4 A, 6 PTS
Anthony Aguanno of the Mississauga Rebels led all OHL Cup defencemen in scoring with six points including two goals and four assists over five games. The Mississauga native finished with the OHL Cup’s second-best plus/minus rating of plus-10, highlighting his week with a three-assist, plus-5 outing in a 5-1 tournament-opening win over the Quinte Red Devils. Aguanno led the GTHL Champion Rebels in scoring as they reached the Quarter-Final and finished with a 4-1-0 record.

Defenceman – Robert Calisti (Toronto Nationals)
7 GP, 1 G, 2 A, 3 PTS.
Robert Calisti led Toronto Nationals blueliners with three points including a goal and two assists over seven games. He picked up his lone goal in the Nats’ 4-0 win over the Quinte Red Devils on Friday and logged big minutes in a pair of 2-1 victories in the Quarter-Final and Semi-Final coming against the Whitby Wildcats and Vaughan Kings. Calisti was a steady presence on the Nationals blue line, helping lead them to an appearance in the OHL Cup Final.

Goaltender – Zach Roy (Toronto Nationals)
7 GP, 5-2-0, 1.91 GAA, .956 SV%, 2 SO
Toronto Nationals netminder Zach Roy shouldered the heaviest workload of any goaltender at the 2017 OHL Cup Powered by Under Armour, playing all seven of his club’s games for a total of 315 minutes in the crease. He finished with the tournament’s second-best save percentage of .956, playing to a 5-2-0 record while registering a 1.43 goals-against average. Roy was one of two goaltenders to record two shutouts in the showcase, helping the Nats blank the Cambridge Hawks with a 22-save showing on Thursday before turning aside 28 shots in a 4-0 blanking of the Quinte Red Devils a day later. Roy earned Nationals Player of the Game honours, making 38-saves in their 3-2 OHL Cup Final loss to the Mississauga Reps. Roy’s 315 minutes played are the most on record by a goaltender at the OHL Cup.